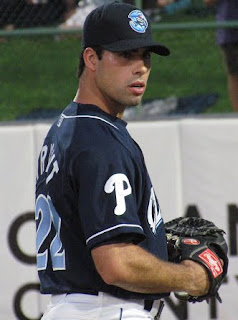 A pair of honors came the way of the Phillies organization on Tuesday with much talked about prospects Austin Wright and Tyler Cloyd each receiving recognition as top performers in their respective leagues.

Wright, a left-handed starter, was named as the Florida State League's pitcher of the year. The 6-foot-3-inch 220-pounder has posted a 10-5 record with a 3.42 ERA while averaging 8.37 strike outs per nine innings in 26 games with the Threshers this season.

Regarding the recognition, the 22-year-old Wright, an 8th round draft pick of the Phillies last year, was excited and appreciative, but has his full focus on continuing his progress upward in professional baseball.

"This season has been a lot of fun. I've learned a lot, but I know I still have a long way to go," Wright stated. "The Florida State League is loaded with talented pitchers and to be named the pitcher of the year is an incredible honor. I know there are many deserving players and I really appreciate the recognition from the coaches throughout the league."

Unwilling to take all the credit, Wright gave his supporting staff a nod for having helped him make an impact on the FSL this year.

"I wouldn't have received this award without a great team and coaching staff behind me, so I'm really appreciative of all the hard work they put in as well," Wright said humbly.

The University of Mississippi product projects to open the season with the Double-A Reading Phillies next season.

Cloyd, the ace of the Triple-A Lehigh Valley IronPigs' staff, was named as the International League's Most Valuable Pitcher. This season, the 25-year-old righty hurler has posted a 12-1 record and a league best 2.35 ERA in 22 starts for the IronPigs. Additionally, Cloyd went 3-0 with a 1.80 ERA in four April starts with Reading.

The Phillies' 18th round draft selection in 2008 is certainly deserving of a call up in September, once the big league rosters expand.