Castro's Cockiness Cause For Concern? 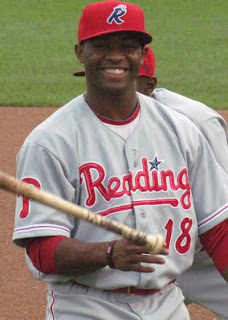 Showing off is part of growing up. We all did it at some point. Get a new bike or skate board; ride it everywhere possible, to ensure maximum visibility. Get a new outfit or jacket; wear it as soon as possible, even if the weather isn't suitable. Drill a no-doubt-about-it home run on the little league field; laugh and celebrate while you jog as slowly as possible to savor every second of it.

Generally those are the types of things people grow out of, but not Phillies outfield prospect Leandro Castro, who enjoys his time on the baseball field to the fullest with tons childlike gusto.

Castro, who was signed by the Phillies at age 17 in 2007, loves the spotlight and can regularly be seen dancing, grooving, laughing, trotting, head wagging and doing everything shy of taunting opposing players while on the field or in the dugout. Unfortunately, for Castro, at times the gloating or prancing is not necessarily to the liking of the Phillies organization, according to Reading manager Dusty Wathan.

"He grew up that way and it's something we try to take a little bit out of it. You don't want to take all of that out of a player, but you definitely don't want too much of it and he has, at times, too much. And it's constant work for him, but I'm very happy with his workload this year and what he's done," Wathan stated recently.

Obviously, what the Phillies do approve of is the effort put forth by Castro with his bat. The 23-year-old has gained as much notoriety for his flare as he has for his playing abilities. Through 102 games against Double-A competition this year, the Dominican native has posted a .292 batting average with 28 doubles, one triple, seven HR and 58 RBI, all while earning recognition as an Eastern League All-Star.

The 5-foot-11-inch Castro shows a more serious side, when he talks about having to spend time on the disabled list with a left shin issue last year. Castro was extremely disappointed with being held to just 56 games played in 2011. He still displayed some power, however, matching his 2010 HR total of 10 in 68 fewer games played than his previous campaign.

Upset that he couldn't help his team, while on the shelf, Castro focused on recovery and pushed aside the usual fun in order to recover and get back on the field, where he is most comfortable.

While those around him might be critical of how Castro operates, the fun-loving slugger is comfortable with his own manners of expression and will always enjoy himself, as long as he is able to compete.

"I just play really hard and I play passionately," Castro said with the help of a translator. "And whatever I am feeling in that moment I'm not afraid to just let the emotion go, because I play hard."

These days, Castro's type of flash might be referred to as "swag". It's an attitude that exists beyond the field. The right-handed hitter took to tooting his own horn, stating that he's ready for major league competition.

"I'm happy about the season I've had and I'm hoping to get to the big leagues this year," Castro said, implying that he could potentially join the Phillies as a September call up, or sooner. "I feel ready to play in the big leagues."

It's unlikely that the organization feels exactly the same way, but Wathan affirms that the Phils have taken notice of the strides Castro has made and they are very pleased with his progress.

"His swing's better. He's a smarter player. He's worked hard," Wathan said. "He's improved himself in a lot of the parts of his game. I think a lot of people wouldn't have ever expected him to make the All-Star team and to have the year that he's having right now."