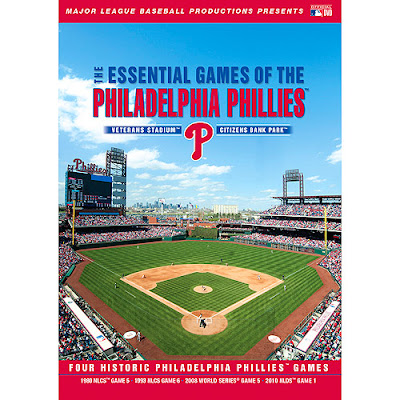 New from A&E, it's THE ESSENTIAL GAMES OF THE PHILADELPHIA PHILLIES DVD SET.

The set features four of the top contests in franchise history. As the tag lines states, it's "100% classic Phillies, 100% Philadelphia baseball."

Games included:
1980 NLCS Game5, Phillies vs. Houston. The Phils captured their 3rd ever pennant and their first since in 30 years.

1993 NLCS Game 6, Phillies vs. Atlanta. The underdog Phils secure a spot in the World Series.

This brand new DVD box set, brought to you by A&E Home Entertainment/MLB Productions, is popping up everywhere. Want to win your own? Simply e-mail your name with the subject line "Phillies DVD Contest" to PhoulBallz at Verizon dot net, or simply like PhoulBallz.com on Facebook. Five individuals will be chosen from e-mail entries and Facebook fans as winners by Tuesday, August 21st 2012.

Prizes, will be shipped within the continental U.S. only.