Cloyd Gets the Call, Honored Along with Ruf 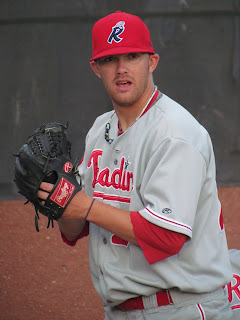 It took an illness to the team's ace, but Triple-A right-hander Tyler Cloyd has finally gotten the call to the big leagues.

With the news that lefty Cole Hamels (14-6, 2.99 ERA) will miss his scheduled start on Wednesday against the Mets, due to a gastrointestinal issue, the Phillies have purchased the contract of Cloyd, the Triple-A Lehigh Valley standout who was named the International League's Most Valuable Pitcher on Tuesday.

Cloyd, the Phillies 18th round draft selection in 2008, had posted a combined 15-1 record with a 2.26 ERA in 26 combined starts at Double-A Reading and Lehigh Valley. The 25-year-old Cloyd was named as an IL All-Star this season as well.

Hamels is expected to make his next start during the Phillies' upcoming weekend series in Atlanta.

To read my feature on Cloyd from earlier this season, click this link.

To hear excerpts from my interview with Tyler Cloyd, click this link.

Additionally, Cloyd was recognized, along with Reading slugger Darin Ruf, as the Phillies' Paul Owens Award winners for the 2012 season. Ruf, a 26-year-old Creighton product, slammed his team single-season record tying 37th home run for the R-Phils on Tuesday. Overall, the Phils' 20th round draft selection from 2009 has posted a .317 average, along with 98 RBI and a league leading 1.033 OPS in 133 games this year.