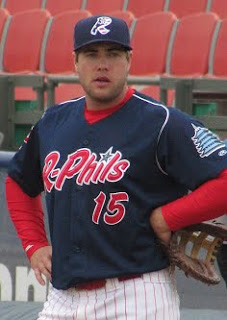 He leads the Double-A Eastern League in home runs (23) and OPS (.961), ranks second in RBI (72) and is seventh in batting average (.306), but Reading Phillies first baseman Darin Ruf has done all of this without much consideration as a real contender to join the Phillies' major league roster.

A 20th round draft selection in 2009 out of Creighton University, Ruf signed quickly with the Phillies and made an immediate impact, posting a .307/.383/.472 line in 57 combined games with the Gulf Coast League Phillies and the short-season Williamsport Crosscutters. He followed that up with a .290/.363/.451 campaign at two levels with Class A Lakewood and Class A Advanced Clearwater in 2010. Last year, Ruf batted .308 with 17 HR and 82 RBI in 133 games while spending the whole season with Clearwater.

Increasingly productive numbers aside, the 6-foot-4-inch 230-pound Ruf has never been considered among the Phillies’ top ranked prospects. Without regard for what others think of him, the 26-year-old has begun to transform himself from a virtual afterthought into an individual that fans have begun to clamor for, as sports radio callers and social networking enthusiasts have been singing his praises of late.

The five-time defending National League East division champions could have a silver lining-like luxury being in last place, 18 games behind division leading Washington. With the Phillies clearly out of contention for a playoff berth, the organization might have the unusual flexibility that would be necessary to allow an up-and-comer like Ruf to get a shot at the big league level. In recent years, the club has mainly used September call-ups in limited roles, but a lackluster 2012 could present an opportunity to expand on that a bit and allow Ruf, who has played some left field for the R-Phils this season, to display how his talents might translate at the highest level of the game.

Ruf, who typically says he only focuses on his own game and not on things that aren’t under his control, such as his place in the system and which roster he is a part of, opened up regarding the possibility of a call up, once the big league rosters expand in September, acknowledging the Phils' obsequious status in the process.

"It crosses my mind a little bit. The Phillies are in a little bit of a different situation than they have been in other years I've been in the organization. But, you know, if that opportunity presents itself, I would absolutely jump at the opportunity and take advantage of any chance I might get”, Ruf candidly told PhoulBallz.com this week.

Although, the right-handed slugger reverts to a reserved state of mind while looking forward to potentially playing winter ball and getting an opportunity with the Phillies next year in spring training, he has also confidently expressed his desire to move upward in a more expeditious manner.

"I'd like to think that I can compete and carry myself where ever I go," Ruf stated. "It's all a game of adjustments and even this year I've had to adjust throughout the course of the year. As long as I keep learning and adapting my game, I think I can compete at any level."

With the ability to acclimate his approach as well as some added versatility after having played a dozen games in the outfield this year, Ruf may be knocking on the door to the big leagues. Whether or not the Phillies change their usual mindset and invite him in remains to be seen.