Asche Shines as Reading's Other Star 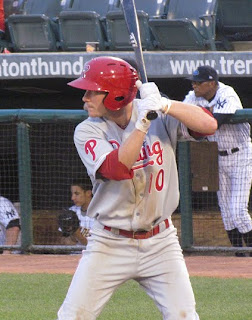 In the midst of a playoff race, talented first-year pro Cody Asche is shining in the shadow of a dominating figure. If not for the scorching hot bat of first baseman/outfielder Darin Ruf, the focus of fans and media members might be fully centered on the Phillies' 4th round draft selection from last summer.

Asche, who typically bats second in the Double-A Reading Phillies' lineup, credits his placement, batting in front of the man that folks have begun to call "Babe Ruf", with providing him chances to see beneficial offerings from opposing hurlers.

"I think I have been getting good pitches to hit, with Ruf doing what he's doing behind me. I've kind of taken the approach that all I need to do is get on base for him and really tried to simplify things at the plate," Asche said.

Ruf, Reading's big-time slugger, has been tremendous in recent weeks. In 21 August games, the 26-year-old Creighton University product has posted a .333 batting average with 14 home runs and 21 RBI.

Both Ruf and Asche have been key contributors for a Reading club that is in contention for a playoff spot in the Eastern League's Eastern division. The team currently possesses a 68-62 record and sits five games behind first place Trenton (Yankees affiliate), tied for second place with New Britain (Twins affiliate).

Asked if the race for that second playoff spot (format has division champs playing their division's second place teams in two series that each advance a winner to the championship round) is something the R-Phils are focusing on at this point, the 6-foot-1-inch 180-pound Asche quickly emphasized that the team's focus is not simply on qualifying for the postseason, but the entire roster is still targeting a division title.

"We're not racing for second. We got a chance to take the division," Asche exclaimed. "But it's all about taking things one game at a time. We're fortunate to have our longest home stand of the year (an game stretch that begins on Thursday) to help with the playoff push."

While the 22-year-old Asche is focused on making the playoffs, he also realizes there is a bigger picture that the Phillies organization cares about as well. The main goal across the board is, of course, individual player development. So, while a team is not likely to make the postseason with players that haven't progressed or performed well, the organization wouldn't care about a championship flag flying in Reading if it meant the players on that club, which the Phils have high expectations for, had not taken strides to improve.

"I'm just trying to finish strong," Asche stated. "The last month is important, not only playoff wise, but for your year as a whole."

Finishing strong is putting it mildly. Dating back to July 20th, the lefty hitting third baseman has gone 49-for-126 (.389 avg) with seven home runs and 30 RBI.

The Missouri native began his pro career last season as a member of the short-season Williamsport Crosscutters, posting a .192 average with 2 homers and 19 RBI in 68 games. Prior to joining Reading this year, Asche was named a Class A Advanced Florida State League All-Star as he tallied a .349 average with 2 home runs and 25 RBI in 62 games.

As he has moved up, a strong belief in his own skills has also seemed to play a role in Asche's string of success. The fast rising prospect says he is minimally surprised with the type of production he has put forth in his first full season in the minors after playing college ball at the University of Nebraska. And whether it's climbing the developmental ladder or striving to reach the postseason, Asche is ready for any challenge presented to him.

"I've always been confident in myself that no matter what's thrown my way, I can handle it," Asche said.