Aumont Promoted as Horst is Deactivated 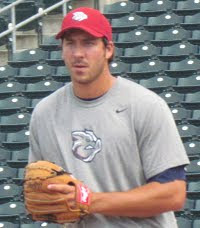 Following the Phillies' 12-5 romp over the visiting Reds on Monday night, the team announced that lefty reliever Jeremy Horst was placed on paternity leave and that right-hander Phillippe Aumont would be called up to the Phils, in order to fill his void.

The 23-year-old Quebec, Canada native was acquired from Seattle in the December, 2009 Cliff Lee trade, along with RHP J.C. Ramirez and OF Tyson Gillies. Aumont was originally an 11th round pick of the Mariners in the 2007 draft.

Aumont, ranked as the Phillies' #4 prospect by PhilliesNation.com prior to the 2012 season, had posted a 3-1 record with a 4.26 ERA and 14 saves in 41 relief outings for Triple-A Lehigh Valley this season.

Until this week, Aumont had been quite hot, posting a 2.08 ERA with a 1-0 record and five saves in 15 outings since the International League All-Star break. However, in his most recent outing, he surrendered four earned runs in 2/3 of an inning during a loss to Toledo on Sunday.

At six feet seven inches tall and weighing 260 pounds, Aumont is a considerably imposing figure on the mound, sporting a fastball that mostly ranges from 96 to 98 MPH, along with a strong curve ball, a sinker as well as a split. The tools are certainly there, but Aumont still needs to improve his consistency in order to achieve the levels of success that have been expected of him since he pitched in the 2008 MLB Futures Game and struck out the likes of David Wright, Kevin Youkilis and Curtis Granderson, to escape a jam, in the 2009 World Baseball Classic.