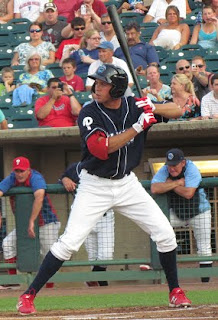 Injuries and setbacks have prevented former Phillies top draft choice Kelly Dugan from becoming a highly regarded prospect for the organization in recent years. Dealing with hamstring problems, a severe ankle sprain and a troublesome staph infection has held the 6-foot-3-inch 195-pounder down, somewhat, in his pro career. Moving forward, though, Dugan is focused on taking strides and making an impact at as many levels of baseball as he possibly can.

The 21-year-old has posted remarkable numbers over the second half of this season for Class A Lakewood. Sporting a .324 average with six home runs and 37 RBI in 64 games since the South Atlantic League All-Star break, entering action on Wednesday, has helped the young outfielder and occasional first baseman to finally show why he was regarded so highly three years ago, when the Phillies selected him in the second round of the MLB amateur draft.

Avoiding injury setbacks is key for all players, but Dugan's level of confidence has spiked this year after getting past the ailments that previously kept him from going full bore on the field of play. Kelly, son of Hollywood heavyweight director Dennis Dugan (Big Daddy, Happy Gilmore), has shown considerable improvements this season and the steps in the right direction can be attributed to not needing to hold back physically.

"When I feel healthy, I think things are more consistent, while not having to battle through anything. I know the game's not always played at 100%, but when you are feeling closer to 100%, physically, I think that helps (the mental side). Now, I got my legs under me and I can run, so I think that's helped with the confidence for me, being able to do that and run a little more and feel stronger in my lower body," Dugan said.

Additionally, the physical ailments limited Dugan's defensive range, which left him manning first base instead of chasing down fly balls in the outfield, where he is more comfortable and became an All-Star in the New York-Penn League last season for the short season A level Williamsport Crosscutters. Back in the outfield in recent months, Dugan has been more relaxed and able to focus on hitting.

A refined approach at the plate has delivered some solid results for Dugan as well and it was all his own doing. Faced with the occasional struggles involved with developing an ability to switch-hit, Dugan made the call to discontinue his efforts from the right side and chose to focus solely on being a lefty batter. The results are evident, as his splits (.297/.379/.496 vs. righties, .290/.391/.421 vs. lefties) display a considerably even amount of success.

"I know switch-hitting has its advantages, but I feel like if I can keep hitting the way I am hitting from one side, then it's an easier craft to practice...and work on everything from one side."

It's clear that the Encino, California native is now back to where he and the Phillies feel he belongs, among a group of prospects that are on the rise and worthy of being talked about in the future plans of the big league club. Dugan is pleased to have made an impact this year and is excited about what is forthcoming.

"I'm happy with the way things have gone this season. I think things can continue to improve and I'm just glad that the team is playing better in the second half. Overall, it's been a pretty good year and I look definitely forward to what's next."