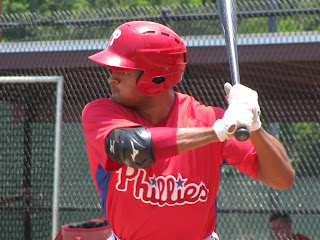 Outfielder Tyson Gillies (pictured), who was suspended from the Double A Reading Phillies recently, following an altercation with the team bus driver, is expected to return to action as early as this Friday, August 3rd. Gillies confirmed exclusively for PhoulBallz.com that he will initially play for the Gulf Coast League Phillies, prior to a return to the upper levels.

The 23-year-old lefty batter, who was acquired from Seattle in the 2009 Cliff Lee trade, posted a .294 batting average with 2 homers and 16 RBI in 46 games prior to the suspension in what has turned into another injury plagued season. Gillies missed a lengthy stretch with a concussion this year following a pair of seasons when he had been shelved with hamstring and foot problems.

Outfielder Domonic Brown, who spent time with the big league club in each of the past two seasons, finally made his return to the Phillies roster on Tuesday. Following the departures of Hunter Pence and Shane Victorino, the Phils had voids that the 24-year-old will happily attempt to fill.

Brown, a left-handed hitter, had posted a .310 average with 5 home runs and 32 RBI in 65 minor league contests this season. In his first MLB at bat of 2012, Brown laced a pinch single against Nationals reliever Henry Rodriguez on Tuesday.

In other promotion news, two Double-A Reading All-Stars are on the move upward as well. Headed to Triple-A Lehigh Valley are catcher Sebastian Valle and second baseman Cesar Hernandez.

Through 83 games this season, the 22-year-old Valle batted .261 while mashing 13 homers and driving in 45 runs. Also worthy of note is that Valle did not commit an error with the R-Phils.

Anonymous said…
Do you think this is change in MO for the phillies? They used to keep their best prospects at the double AA level then move them to AAA right before their promotion to the big club. Obviously these two players are not getting promoted this year to the big club.
August 1, 2012 at 8:23 AM

fred said…
Do you think this is change in MO for the phillies? They used to keep their best prospects at the double AA level then move them to AAA right before their promotion to the big club. Obviously these two players are not getting promoted this year to the big club.
August 1, 2012 at 8:24 AM

Jay Floyd said…
Same date last year Freddy Galvis went from Reading to Lehigh Valley, so it's not totally out of the ordinary. Not a full change, but some things are certainly being done differently this year with Joe Jordan at the top of the minors.