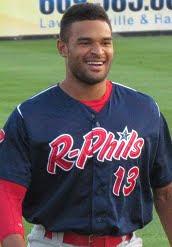 Following his suspension for an inappropriate confrontation with the team bus driver, outfielder Tyson Gillies returned to the active roster for the Double-A Reading Phillies on Thursday night. Batting lead off, the speedy catalyst, who has missed hefty time due to injuries since being acquired in the December 2009 Cliff Lee trade, went 1-for-4 with a home run and a walk.

Gillies was all smiles and completely overjoyed to be back with his teammates, as the R-Phils hold onto the playoff qualifying second place in the Eastern League's Eastern division, 1/2 game ahead of New Britain in the standings.

Prior to Thursday's contest, I spoke with Tyson to gauge his feelings on the situation that cost him even more crucial time away from the game, a hot playoff race and more. That brief Q&A lies ahead.


-Suspensions are never good, but do you think there is any kind of silver lining or lesson learned from this situation that occurred?

The thing is, baseball can get to be very frustrating and stuff and handling your emotions are a big thing in this game or anywhere in life, so yeah, I guess you can take a lesson from it. I have to learn not to get too excited and handle my emotions better and be able to let a lot of things go. You know, I'm just going to move forward and use that as a learning experience from here on out.


-After this year, is there a possibility that you'll be playing in an off-season league to make up for time missed?

I would love to play winter ball the off-season. Even through a full healthy season, my intentions were still to go there and play and progress and learn a lot more about the game. Yeah, definitely, I'm just waiting to hear and see if I can go play somewhere down there and I'll just have to wait and see.


-Any idea where? One of the Caribbean leagues?

I have no idea where they'd want to send me. I'll just be happy to be playing baseball.


-Talking to some teammates, they definitely seem excited to have you back, as the team is in the thick of playoff contention. What does it mean to have the players fired up behind you like that and appreciative of your return here?

I'm happy. I tried to rush back, just to see the guys. I've been with most of these guys since April and even through spring training. So, you miss the personalities and you miss seeing the guys every day so, it's definitely awesome to be back and I'm just happy to see everybody.


-What's your energy level like here, rejoining the club as they team fights for that playoff spot?

I'm just trying to come back, get on base any way possible and help the team score runs, because we're in the hunt for the playoffs, like you said, and we just want to win and we want to get that championship.


-Clearly, you've had ups and downs in your career, injuries with the hamstring, the foot, the concussion, then the suspension and other things. What has been the biggest hurdle for you in your pro career?

You know, the biggest hurdle was probably just getting over that concussion. That was the first one I've ever had in my life and six and a half weeks of that, you know, trying to come back, coming back too soon and pushing it. You know, it's just a really rough thing to go through and not being able to do anything in that time, I wasn't able to get my lifting in and my body got week and it all just took its toll. It was all connected somehow and I hope next time, hopefully there never is a next time, but you always learn from each injury and you learn how you're able to heel faster.
__________________________________________________________