Manuel Has Plans For Thome 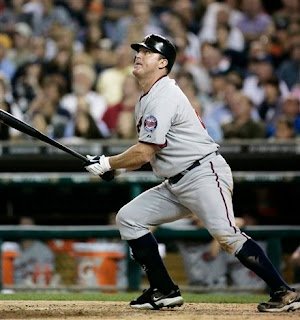 This off-season the Phillies improved their offense quite a bit by adding multiple free agent reserve types. One of those acquisitions, Jim Thome, is a familiar face that made the man who is in charge of the team each game day extremely pleased.

Phils' manager Charlie Manuel knows what Jim Thome can do and looks forward to the type of contributions Thome will make on and off the field. Manuel coached and managed Thome during the 1990's and early-2000's in Cleveland, and then managed Thome again in Philadelphia in 2005.

Thome, who ranks 8th among MLB sluggers all-time in homeruns with 604, solidifies a Phillies bench that lacked power last year, especially from the left side.

Manuel, the most winning manager in team history, knew from Thome's days as an emerging power hitter, that the now 41-year-old would become an elite slugger in the sport.

"I've been around Jimmy about the first fifteen years of his career. I'll tell you something, when I look at him sometimes, for him to hit 600 homeruns, I never thought he would hit 600 homeruns. But, when he was young, and I used to sit and talk to John Hart and these guys, you know, the general manager and the assistant GM Danny O'Dowd, about what he was going to do, I used to say that he's gonna hit close to 500 homeruns. I used to definitely think that, if Thome was here, he'd tell you that," Manuel stated.

Locking up a guy that loves to play and that exudes a positive attitude at nearly all times is something that Manuel was very happy about this off-season. The Phils' skipper feel that Thome's presence, even on days off, will help the team on the field.

"Thome's a guy that can walk through our clubhouse and have (a positive) impact. And if he's not playing a game that day and he goes out and watches the game, other guys are gonna follow him. Things like that are what I look for. He's so upbeat and he gets along with everybody."

The Phillies have a plan in place to get Thome, who has played a total of 28 innings in the field since he left Philadelphia following the 2005 season, some time on defense at first base in minor league games, when the spring training schedule begins. After some time, Thome will be eased into some Grapefruit League games against big league competition.

Manuel feels that Thome can contribute a considerable amount in limited playing time this coming season, citing the veteran's experience as being beneficial toward adapting to new his reserve role.

"He's still got a good enough bat," Manuel stated. "In the last couple years, he's hit 40 homeruns...in about 500 at bats or something.

"If we can get him in a game a week, or two or something like that, I figure he'll get- I don't want to put a solid number on his at bats, but, I would say if he can get to 200, that'll give him plenty of time to stay sharp, and stuff, because I think he's experienced enough to know how to pinch hit now."

Accurate numbers for 6-foot-3-inch 250-pound Thome over the past couple of seasons are 40 homeruns in 553 at bats, but nevertheless, Manuel seems correct, as the potential Hall of Famer, Thome, has kept his productivity up while his playing time has dwindled. Add in his .269 batting average, 32 doubles and 109 RBI over that stretch, and it is clear that big Jim can still get it done at the plate.

After an August trade last year, the veteran of 21 major league seasons made a return to Cleveland, where his professional career began when the Indians drafted him in the 13th round of the 1989 amateur draft. The manner in which Thome returned to Philadelphia, which became his second pro organization when he signed there as a free agent in 2002, wasn't attributable to the opening left when All-Star first baseman Ryan Howard required achilles tendon surgery after the 2011 post season. According to Manuel it was more about both sides wanting to reunite for some time.

"I think the opening really didn't matter. Last year, we were trying to get him, like down toward the end (of the season), 'cause we wanted him to hit for us. But, he had to clear waivers and Cleveland is where he started his career and they picked him up. In some ways that was good for him, but when the season was over and he became a free agent, he had us in mind all along and Ryan getting hurt is something that had nothing to do with it."

It's a sure thing that the potential to win that elusive World Series ring helped rank steadily post-season bound Philadelphia high on Thome's list of desired destinations. If everyone involved has their way, jewelry will surely be in the big man's future.


Another key addition to the Phillies' roster this off-season was Jonathan Papelbon, who served as Boston's closer for six seasons. Manuel expressed additional excitement about the four-time All-Star solidifying the back end of his bullpen.

And in regards to the manner in which the Phillies may ease some ailing players into action this season, Manuel was candid and referenced a focus on light .