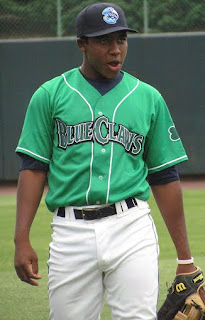 Maikel Franco has quickly caught plenty of attention around minor league baseball. The Dominican Republic native, whose name is pronounced similarly to Miquel, was signed by the Phillies in 2010 as an amateur free agent.

The 6-foot-1-inch 180-pounder began his pro career with the Gulf Coast League Phillies in 2010. As that club’s everyday third baseman, Franco posted respectable numbers for a 17-year-old making his professional debut (.222/.292/.330). It was Franco’s defense, however, that immediately began to get him noticed. With excellent reflexes and a top notch arm at the hot corner, Franco impressed many in his U.S. debut.

A year later, Franco began the season in extended spring training and later competed with the short-season Williamsport Crosscutters. The righty hitting Franco looked great against NY-Penn League competition, posting 2 homers, 28 RBI and a .274/.339/.389 line in 42 games before earning a promotion to Class A Lakewood.

As an 18-year-old in the South Atlantic League, the baby-faced Franco struggled mightily. In 17 games for the BlueClaws, the Dominican born prospect went 8-for-67 (.123 avg) and racked up a weak .349 OPS. The Phillies realized Franco was over-matched and that he was growing discouraged, so he was re-assigned back to Williamsport, where he finished the season by batting .333 with 7 extra base hits and 10 RBI over his final 13 games with the Crosscutters.

One definite plus about Franco’s time with Lakewood was that he made no errors in those 17 games. However, striking out 15 times while walking only once for the 'Claws, compared to 30 K's and earning 25 free passes in 54 games for the 'Cutters screamed of Franco not being quite ready for the more experienced pitchers of the SAL.

With no career stolen base attempts in two pro seasons, speed is not a facet of Franco's game.

Mickey Morandini, who managed Franco with Williamsport in 2011 and will surely be reunited with him in Lakewood in 2012, as Morandini was promoted up a level this off-season, describes Franco as being relied on as a middle-of-the-lineup RBI guy. Morandini feels Franco projects as a power bat, as he fills out physically and climbs the developmental ladder.

Still very young, at 19 years of age until the end of August, Franco is in a great spot to land among the top tier of prospects if he can prove himself offensively at the full season Class A level this year.