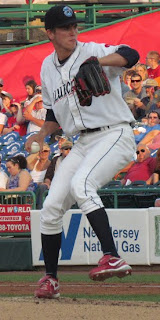 Righty hurler David Buchanan has proven himself as a guy on the fast track upward in the developmental ranks. The 22-year-old ripped through Class A South Atlantic League competition, leading his manager, former big leaguer Chris Truby to describe him as "the most consistent pitcher in the league".

The Lakewood BlueClaws' horse became the starting pitcher for the SAL Northern Division All-Star team in 2011. In 20 starts, Buchanan went 11-5 with a 3.38 ERA and a .246 batting average against with Lakewood before being promoted for the final month of the season. As a member of the Class A Advanced Clearwater Threshers, Buchanan posted considerable numbers through his first five outings, sporting a 3-1 record with a 3.07 ERA. A weak final start to his 2011 campaign (4 ER, 8 hits, 3 innings) largely effected his Clearwater stats.

The 6-foot-3-inch 190-pounder used his sweeping delivery and an arsenal of a fastball that registers in the low-90's, a developing slider and a solid sinker to tally strong stats in his first full professional season. The sinking two-seamer helps him live up to the billing of being a ground ball pitcher, something that could prove valuable as he moves up the developmental ranks.

The modest Georgia native attributes his promising success to date to his coaches, other Phillies instructors as well as the defense that plays behind him during each outing.

Selected by the Phillies in the 7th round of the 2010 amateur draft, the man jokingly referred as "Buck Nasty" by his teammates made his pro debut that same year as a member of the short-season Williamsport Crosscutters. He posted a 3-1 record with a 4.21 ERA in 13 starts. His questionable control at that level (30 strike outs/23 walks in 62 innings) led to some necessary adjustments to his delivery. As Buchanan showed tendencies to get ahead of himself, rush through his motions and to over-analyze situations, Lakewood pitching coach Steve Schrenk would often stress the need for the youngster to slow things down on the mound and to pitch with a clean mental slate. That focus resulted in a much improved strike out to walk ratio (110 strike outs/43 walks in 157 1/3 innings) at two levels last year.

Growing up as a Braves fan, Buchanan was a major fan of pitchers like John Smoltz, Greg Maddux and Tom Glavine. These days, he's most impressed by a hurler in the Phillies organization that he hopes to share a locker room with some day...Roy Halladay.

Buchanan was originally selected by the Mets in the 6th round of the 2009 draft, but chose not to sign. Instead, he transferred from Chipola Junior College in Florida to Georgia State University, where he became that school's highest drafted baseball player ever.

Looking forward to 2012, Buchanan could benefit from a full season with Clearwater in the Florida State League, where he'll be reunited with promoted skipper Truby and strive to impress organizational brass once again. Buchanan projects as a finesse starter at higher levels. Progress will determine how far up the ladder he goes.