By Jay Floyd January 16, 2012
It just so happens that this year's list of top 25 Phillies prospects includes 26 deserving talents. As a result, we have a pair of individuals that simply can't be left off of these annual rankings brought to you by PhoulBallz.com and PhilliesNation.com. Two men tied for the number 25 spot on our list. 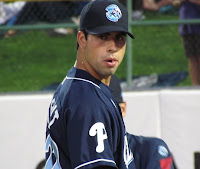 Austin Wright, an 8th round draft selection last year, prevailed as a tremendous talent in his few short months of professional baseball. The 6-foot-4-inch 235-pound left-hander was a JuCo standout and later transferred to Ole Miss, where he lived up to his parents' dreams of him pitching in the Southeastern Conference.

Previously selected in the 23rd round by the Boston Red Sox in 2010, Wright chose not to sign at that time.

Wright, an Illinois native that grew up as a Cubs fan, idolizing impressive pitchers such as Kerry Wood and Mark Prior, capitalized on a strong confidence in his own abilities and improving control to sport a 4-3 overall record, a 3.03 ERA and a .234 batting average against in 15 games (14 starts) between short-season Williamsport and Class A Lakewood.

The 22-year-old's arsenal includes a low-90's fastball (clocked 91-92 late in the season, but college reports had him a shade higher), a big time curve ball that has impressed many within the system, a slider and a change up. Phillies developmental coaches will likely tinker with Wright's secondary pitches in an effort to find what works best for him against pro competition.

Wright describes his fastball command as his own key strength, stating that his ability to get ahead of batters gives him the advantage on the field.

If Wright continues to progress, he should be ranked much higher on this list next year.

Aaron Altherr is a 21-year-old who was picked in the 9th round of the 2009 amateur draft.

A righty hitting outfielder that stands 6 feet 5 inches tall and weighs around 195 pounds, Altherr was a fast rising youngster in the Phils' developmental ranks a year ago, as he was ranked as a top 10 prospect in the Philadelphia organization by Baseball America. However, a lackluster 2011 campaign certainly dropped his stock in many people's eyes.

Altherr was the starting center fielder for the Class A Lakewood BlueClaws in the South Atlantic League to begin the season, but after 41 games and some unimpressive numbers (.211 avg, 1 HR, 15 RBI), he was demoted to short-season Williamsport when that club came north to begin its season in June. Altherr was not discouraged, however, as he used the reassignment to up his focus and get back on track.

With the Crosscutters last season, Altherr earned himself a spot as a NY-Penn League All-Star, posting a .260 average with 5 HR and 31 RBI in 71 games.

The best part of Altherr's game has clearly been his speed. He has been tremendous on the base paths, as proven by his 90% success rate in stolen base attempts (37 for 41) during the 2011 season.

Altherr, who was born in Germany to a military family, played shortstop and was a premiere pitcher as a high schooler, but was repositioned to the outfield once he began his career in the Phillies organization.

The very athletic Altherr displays excellent range in the outfield. With a solid arm and great instincts, he has the ability to develop the defensive side of his game to an elite level.

Expect Altherr to get another shot at beginning the season with Lakewood in 2012. As a fourth-year pro, it will be crucial for Altherr to show some serious offensive improvements and establish himself as being worthy of the high praise that has been tossed his way by national outlets.

Anonymous said…
OMG, do you see whats happening in Syria? In spite of a brutal government crackdown, the manifestations continue
January 17, 2012 at 11:33 AM