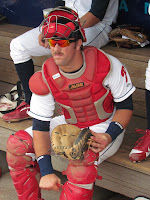 A blazing hot second half of his 2011 season solidified a spot on this list for catching prospect Cameron Rupp. Following a feeble opening half last season in which he sported a .219 batting average with 2 homeruns and 13 RBI in 48 games, Rupp exploded after the All-Star break, batting .318 with 2 homeruns and 31 RBI in 51 games.

Selected in the 3rd round of the 2010 amateur draft out of the University of Texas, Rupp made his professional debut with the short-season Williamsport Crosscutters that season. In 55 games in 2010, Rupp posted a .218 batting average with 5 homeruns and 28 RBI against NY-Penn League competition.

Praised for his work ethic on defense, his strong throwing arm, his solid footwork and especially for his ability to lead, Rupp is quickly becoming the complete package on that side of the game.

Last season, the 6-foot-2-inch 230-pound Rupp helped a developing collection of young pitchers like David Buchanan, Garett Claypool and Lisalberto Bonilla make their marks in a tough South Atlantic League. Each of those hurlers were named as All-Stars, but each attributed credit to their battery mate for guiding them to such heights.

The 23-year-old Plano, TX native was perhaps a victim of a heavy workload at times during 2011, due to injuries suffered by his back ups, Jeff Lanning and Torre Langley. In leagues where pitchers and other position players get days off and/or certain amounts of down time, catchers are counted on to work with pitchers for their side sessions daily, before batting practice and other team activities. Rupp finally adapted to the daily grind in the latter portion of his first full season in the minors.

Confidence was the biggest key for Rupp, although, according to Lakewood hitting coach Greg Legg, he did tweak his offensive approach a shade, after his early season struggles. Throughout last summer, Rupp and Legg worked closely together, shortening his swing and improving his load. On top of those minor adjustments, Rupp's focus at the plate became more sharp. All of that translated into a string of success that snowballed and helped Rupp raise his season OPS 87 points in the second half of the season.

Look for Rupp, whose father Kevin pitched in the Montreal organization during his playing days in the 1970's, to begin the season with Class A Advanced Clearwater in 2012. Clearly positioned behind highly-regarded catching prospect Sebastian Valle, on the organization's developmental rankings, Rupp will get every opportunity to shine, as he tries to play catch up to the talented Mexican that is twenty-two months his junior.

If his hitting can follow the other facets of his game and improve to impressive levels, Rupp will be a prospect that other teams come calling for this summer.