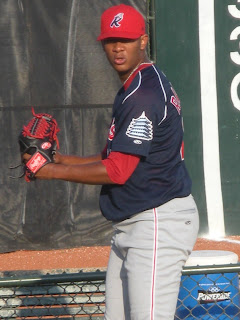 For more than two years, righty hurler J.C. Ramirez has been primed to become an impact prospect in the Phillies system, but inconsistency seems to be preventing the Nicaragua native from truly proving himself as a dependable talent.

Last season, Ramirez spent the entire season in the Double-A Reading Phillies’ starting rotation, where he got off to a scorching hot start in April, going 4-0 with a 1.03 ERA and a .187 batting average against in 4 starts, but his output fizzled quite a bit after that. Ramirez posted an overall record of 11-13, an ERA of 4.50 and .258 batting average against in 26 starts for the R-Phils. After the All-Star break, Ramirez struggled considerably, tallying a 5.92 ERA and a .305 BAA in 10 outings.

It’s possible the 23-year-old experienced fatigue, after he was initially thought to be fully recovered from off-season hip surgery. The wear and tear was rumored to have resulted in nagging discomfort that Ramirez decided to play through.

Regularly praised for his “stuff” by coaches, Ramirez rolls easily when things are going good, but he virtually crumbles when things don't go his way. Often open about his own lack of confidence in his pitches after rough outings, the 6-foot-3-inch 225-pounder's mental toughness is likely the quality most in need of development. The key is often for Ramirez to keep his pitches down in the zone. He runs into trouble when he fails to locate properly and then it snowballs from there.

With a two-seam fastball that steadily reaches the mid-90's, a slider with excellent control, and a change up that he uses to keep opposing batters honest, Ramirez has tools that continue to impress at times. After focusing on using his change up more in 2010, Ramirez worked on maintaining a steady release point with his slider in 2011.

After joining the Phillies, along with Phillippe Aumont and Tyson Gillies as part of the Cliff Lee to Seattle trade, Ramirez posted a 7-7 record and a 4.82 ERA combined over 24 starts with the Class A Advanced Clearwater Threshers and the R-Phils in 2010.

Ramirez, the product of a Cuban father and a Nicaraguan mother, says that he loves being able to learn from so many of the Phillies' highly regarded major league players. During spring training last year, Ramirez spent time with the big club and was able to talk pitching with Cliff Lee, the man he was once traded for, as well as Jose Contreras, who coached the youngster a bit. He was also able to bond closely with Chase Utley, who once had similar surgery to repair torn hip cartilage.

A year ago, it looked like Ramirez was on the fast track toward the big leagues. These days, it is clear that Ramirez needs a considerable amount of seasoning before he'll reach the big time. 2012 presents a great challenge for Ramirez to see if he can display a reliable steadiness that will help him climb the developmental ladder.

This countdown is being published in conjunction with PhilliesNation.com. Click here for the index page for this countdown.