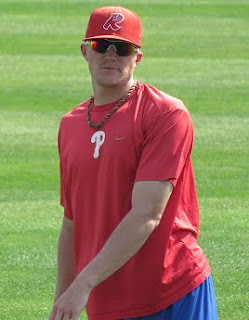 Lefty reliever Jake Diekman raised his value a considerable amount in 2011. The 6-foot-4-inch 190-pounder was fresh off a dismal effort in the Arizona Fall League, over the off-season, when a revised focus and some simple adjustments to his loosening efforts breathed new life into the young hurler's pro career.

After struggling in the Arizona Fall League in 2010, when he allowed 12 earned runs in 3 2/3 innings over 5 outings, Diekman refocused his approach on the mound. Diekman entered the 2011 season with a goal of throwing all his pitches for strikes and getting into a hitter's mentality in order to mix up his approach toward the opposition. That approach helped the Phillies' 30th round draft choice from 2007 compete against hitters at the higher levels of the minors.

The 25-year-old Diekman sports a pitch repertoire that includes a fastball, a slider and a change up. In 2011, the Nebraska native added a couple notches of velocity after receiving advice from former Williamsport pitching coach Lance Carter, in spring training. The tip, lowering his arm angle when playing long toss, landed Diekman's fastball at 95 MPH on a regular basis. The increased speed helped Diekman in match ups against opposing batters, as he saw his K/9 rate shoot up from 9.05 in 2010 to 11.49 in 2011.

As further evidence of his improvements as a pro recently, across three levels in his first two professional seasons, Diekman posted a 7-13 record and a 4.45 ERA with 142 strike outs in 194 1/3 innings.

Mentally, Diekman has displayed the ability to be tough and fearless on the mound. His focus going forward will be on consistency with his mechanics, especially with his arm angle, as he continues to strive toward the ultimate goal of pitching in the big leagues.

Headed into 2012, Diekman should get a good look with the big club in spring training and will likely begin the season with Triple-A Lehigh Valley. As inevitable injuries, that could effect many people's sports betting strategies, arise in the Phils' bullpen during the regular season, Diekman stands a very good chance at being a hurler that the team counts on to fill those voids and contribute.