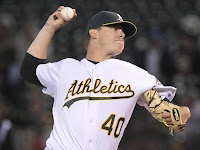 This Saturday, January 7th, All-Star hurler Bailey, along with his wife Amanda, will host the Bailey Bowl, a charity bowling event for the Strike 3 Foundation set to raise money for the Childrens Hospital of Philadelphia and pediatric cancer research. The bowl-a-rama is set to take place at 7 p.m. at the Pinsetter Bar and Bowl on Maple Avenue in Pennsauken, NJ. Admission to the event is $175 at the door.

Bailey, a right-handed closer, was born in nearby Voorhees and attended Paul VI High School in Haddonfield. The three-year big league veteran was traded from Oakland to Boston last week in a 5-player deal.

Sponsors of the Bailey Bowl include Joe Canal's Liquor, Wilson, Playstation, Porsche of the Main Line, Topps and Hess Winery.

Finkel, a WWE Hall of Famer, is slated to serve as master of ceremonies for the event. Papale, Bottalico, Williams, Valentine and other sports figures will be on hand to bowl and mingle with those in attendance.

For more information on The Strike 3 Foundation's Bailey Bowl, call 856-665-3377. If you are unable to attend and would like to donate anyway, visit this link.