By Jay Floyd January 13, 2012
It's time once again for everybody to come aboard the PROSPECT TRAIN!

With just over five weeks until pitchers and catchers report to Clearwater, FL to officially kick off spring training, we'll be spending this time reviewing our exclusive rankings of the top 25 prospects in the Phillies' organization. Taken into consideration when reviewing these young talents will be age, minor league performance relative to levels played, value to the organization and future potential.

Gradually, over the comings weeks, as we approach a new season with hopes higher than Snoop Dogg on his marijuana stocked tour bus, we will be unveiling player reviews for all of the best developmental talent that Phils fans should be familiar with.

These rankings will not include players over 25-years-old or individuals that have spent multiple stints with the Phillies at the big league level. Thus, players like Domonic Brown, Joe Savery and Matt Rizzotti will not be featured.

Some terrifically talented young players did not make the cut simply because other individuals ranked higher. Included in the group that fell short of making this year's top 25 list are a former supplemental round draft pick, outfielder Zach Collier, 2011 second round draft choice infielder Roman Quinn and righty hurler Eric Pettis.

Additionally, some players from last year's rankings won't appear on this list for a few reasons. Some have left the organization, one graduated to the big league club and a couple have advanced beyond the newly imposed 25-year age limit. Others fell off the list simply because they haven't proven themselves worthy of holding down their spots. Those players are former second round pick Kelly Dugan and outfielder Leandro Castro.

Collier, who missed the entire 2010 season with multiple injuries, had a solid return campaign in 2011 in his second stint with the Class A Lakewood BlueClaws. The Phillies' supplemental round pick from the 2008 draft, batted .255 with 1 HR, 36 RBI, 50 runs scored and 35 stolen bases in 112 games this past season, but in early September news broke that the 21-year-old Collier had tested positive for amphetamines. He will have to serve a 50-game suspension at the start of the 2012 season.

Quinn, a speedy infield prospect, spent time around the Phils' Gulf Coast League club in the latter portion of the 2011 minor league season, after he signed his first professional contract, but has yet to see action in an official minor league game. The shortstop is well-hyped and I simply want to review some game stats or to see him in action before he cracks this list. Quinn agreed to sign out of high school with the Phillies for $775,000. 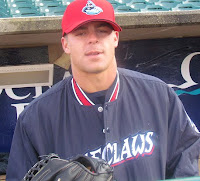 Pettis was a 35th round draft choice out of UC Irvine in 2010 and has proven to be quite the late round steal. In two seasons with the Philadelphia organization, Pettis has posted a 10-3 record with 12 saves and a 2.17 ERA in 67 games (62 in relief) while striking out 122 batters and walking just 24 in 128 2/3 innings. Pettis, 23, should surely see action during the 2012 season with the Double-A Reading Phillies and is poised to force his way onto this list at any time. A weak second half in which Pettis sported a 5.54 ERA over his final 21 outings effected his consideration for this list.

Dugan, who was selected by the Phillies in the second round of the 2009 draft, was an All-Star in the short-season NY Penn League in 2011, but a failure to reach the Class A full-season level, in his third year as a pro, downgraded him a bit in regards to this list. Son of Hollywood director Dennis Dugan, Kelly posted a .284/.343/.386 line in 47 games for Williamsport last season. The 21-year-old spent a considerable amount of time at first base during 2011 spring training, as the Phillies tried to enhance the outfielder's versatility, but he only notched 5 games there last season. Consider Dugan a lock to play with Class A Lakewood in 2012.

The Dominican-born Castro may still be a dancing machine, but an injury limited him to just 56 games in 2011. The outfielder sported a .277 batting average and a .785 OPS with the Class A Advanced Clearwater Threshers, but is likely to return to the Florida State League to begin the 2012 season due to missing time last year. Castro, 22, has the tools to make a solid impact and simply needs to stay healthy in order to rise back upward in the organizational prospect ranks.

In the coming weeks, check back here regularly as I unveil how bright the Phils' future is with the newest list of the top 25 ranked prospects within the Philadelphia organization, one by one.