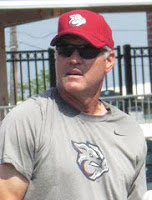 On Monday, the Phillies announced the return of Ryne Sandberg as manager of Triple-A Lehigh Valley. Sandberg, a Hall of Fame player, is back for his second season with the IronPigs after leading the club to its very first playoff appearance in 2011.

Sandberg, who was originally drafted by the Phillies in 1978 and dealt to the Chicago Cubs in 1982, became a legend in a different city. As a member of the Cubs, Sandberg became a 10-time National League All-star, a 9-time Gold Glove Award winner and 1984 NL Most Valuable Player. Last season, he returned to the Philadelphia organization after 29 years away.

The remainder of the Lehigh Valley coaching staff, Rod Nichols and Sal Rende, will return for the IronPigs as well.

New additions to the developmental coaching ranks include former Phillies Andy Tracy and Aaron Fultz. Tracy will manage the short season Williamsport Crosscutters, while Fultz will serve as that club's pitching coach.

Former Phillies second baseman Mickey Morandini will move from Williamsport to Class A Lakewood, where he will manage many of the same players he had during the 2011 season, as those individuals move up the minor league ranks. Morandini becomes the 10th manager in BlueClaws history. Hitting coach Greg Legg will return to Lakewood. Legg celebrated his 30th season in the Philadelphia organization in 2011. Former big league hurler Les Lancaster will join the 'Claws as pitching coach after filling that role with the Gulf Coast League Phillies in 2011.

Chris Truby, who managed the BlueClaws in 2011, will move up a level and lead the Class A Advanced Clearwater Threshers. Truby played in the Majors with the Astros, Expos, Tigers and Rays. Former Kansas City Royals manager John Mizerock returns for his second season as a coach for Clearwater and pitching coach Dave Lundquist will be back for his fourth.

Filling the void left by Mark Parent, who left the Phillies minor league ranks to join the Chicago White Sox as bench coach, Dusty Wathan will take over as the skipper of the Double-A Reading Phillies. Wathan managed the BlueClaws to the South Atlantic League title in 2009 and spent the last two years with Clearwater. Pitching coach Bob Milacki and hitting coach Frank Cacciatore will both return to the R-Phils

Roly de Armas will manage the Gulf Coast Phillies for the sixth consecutive season and ninth, overall. His coaching staff will be comprised of Kevin Jordan and Steve Schrenk, who are each spending the winter managing in the Australian Baseball League.

Another former big league player, Andy Abad, will join the ranks of the Phillies' roving minor league instructors and serve as the new outfield/baserunning coordinator for the developmental system.

Absent from the mix is Lance Carter, who served as pitching coach with Williamsport for two seasons. Carter was regularly praised by the Phillies' young pitching prospects. Young hurlers such as Eric Pettis, Colby Shreve, Jake Diekman have stated in interviews with PhoulBallz.com that Carter's influence greatly impacted their professional careers. Players will surely miss the former Royals, Rays and Dodgers pitcher.

Minor league coaches will report to Clearwater for spring training in late February.