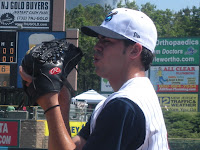 Throughout the off-season, we'll take regular looks at Phillies players participating in winter leagues around the world. Plenty of players contracted to the Phillies are still in action, despite the North American season being over for many weeks. In this post, the Caribbean and Australian baseball leagues will be covered.

-Right-handed hurler Julio Rodriguez (pictured), an 8th round draft selection in 2008, has appeared in two games as a reliever for the Gigantes de Carolina in the Puerto Rican Winter League. In his first outing, the 21-year-old threw 2 1/3 scoreless innings, while he allowed 2 earned runs in 2/3 of an inning in his second appearance. Rodriguez had an outstanding regular season for the Class A Advanced Clearwater Threshers in 2011, going 16-7 with a 2.76 ERA and a .186 batting average against in 27 starts.

-Shortstop Freddy Galvis has performed well lately for the Aguilas del Zulia in the Venezuelan league. After a considerably slow start and a wrist ailment that forced him to miss a week, Galvis has produced steadily improving numbers resulting in a .241 batting average with 12 RBI in 18 games. Galvis solidified his status among top Phillies prospects this year by posting a .278/.324/.392 line in 137 combined games with Double-A Reading and Triple-A Lehigh Valley.

-Second baseman Cesar Hernandez has posted a .266 average through 21 games with the Bravos de Margarita in Venezuela. The switch-hitting 21-year-old has just one extra base hit thus far...a double. Hernandez, who was signed as a free agent by the Phillies in July, 2006, has not appeared in a game in more than twoa weeks. The well-regarded prospect posted a .268/.306/.333 line in 119 games with the High A level Clearwater Threshers during the 2011 regular season.

-Infielder Carlos Rivero is batting .246 with 5 doubles and a HR through 19 games with the Leones del Caracas in the Venezuelan league. Rivero, who was claimed by the Phillies last off-season from Cleveland, is 23 years old and bats right-handed. The Venezuelan born Rivero had a good 2011 regular season, posting a .270/.326/.440 line, combined with Reading and Lehigh Valley.

-Lefty pitcher Ervis Manzanillo has made one scoreless relief appearance for the Navegantes del Magallanes in Venezuela. No word on why Manzanillo has not pitched since October 13th. During the 2011 regular season, the 20-year-old Manzanillo had some ups and downs with the Class A Lakewood BlueClaws, posting an 8-7 record with a 5.02 ERA with a .257 batting average against in 26 games (25 starts).

-Reliever Justin Friend, a Rule 5 draft pick of the Phillies last off-season, has pitched in 6 games for the Tiburones de La Guaira in Venezuela. The 25-year-old, who served as a closer for both Clearwater and Reading this past season, has earned 3 saves for the Tiburones. In 55 combined games during the 2011 regular season, Friend went 3-7 with 28 saves and a 2.75 ERA while striking out 61 and walking 16 batters in 59 innings.

-Outfielder Rich Thompson, who was a key contributor throughout the 2011 season with the Triple-A Lehigh Valley IronPigs, has posted a .265 average with a double and a homerun through 9 games with the Estrellas de Oriente in the Dominican League. The 32-year-old Thompson has not appeared in a game since November 2nd.

-Scott Podsednik and Scott Mathieson are assigned to rosters in the Venezuelan Winter League, however neither of them have seen game action just yet.

-Left-handed pitcher Juan Perez has looked great in the Dominican Winter League with the Gigantes del Cibao. Through 13 games Perez has a 0-1 record with a save and has not allowed an earned run. In 16 innings, the 33-year-old has struck out 19 batters and walked 6 batters. The veteran reliever appeared in 8 games at the big league level with the Phillies in 2011.

-Another member of the Gigantes in the Dominican Republic, Wilson Valdez, has struggled with his average, going 8-for-34 (.235 avg) through 9 games with the Gigantes del Cibao in the Dominican Republic. Among his 8 hits, Valdez has laced 2 doubles and 2 homeruns. The 33-year-old batted .249 in 99 games with the big league Phillies this past regular season.

-Utility man Michael Martinez has performed miserably with the Estrellas del Oriente in the Dominican league. Through 7 games, Martinez has gone 2-for-28 (.071 avg). The 29-year-old has been playing shortstop and batting lead-off for the Estrellas. Martinez batted .196 in 88 games with the Phillies in his first MLB season in 2011.

-Another member of the Estrellas, outfielder Leandro Castro, who missed much of the 2011 regular season with an injury, has appeared in one Dominican League game, but did not have an official at bat. Castro, 22, was assigned to the High A level Threshers this year, where he posted a .277/.304/481 line in 56 games.

-19-year-old pitcher Fabian Cota, through 10 relief appearaces with the Caneros de los Mochis in the Mexican Winter League, has posted a 9.64 ERA with 1 save and a .412 batting average against. In 15 games with the Gulf Coast League Phillies in 2011, the Mexican lefty recorded a 1-0 record with a 3.52 ERA. The 6-foot-1-inch 170-pound Cota has not appeared in a game since November 6th.

-Also in the Mexican league, top Phillies offensive prospect Sebastian Valle has posted a .261 batting average through 6 games with his hometown Caneros de los Mochis. Valle, 21, has 2 doubles and a homerun among his 6 hits. Last year, Valle, who is a catcher, played the outfield in the Mexican league to avoid additional wear and tear behind the plate. The righty-hitting Valle is the Phillies’ top ranked offensive prospect according to several outlets.

-Catcher/infielder/outfielder Tim Kennelly has posted a .471 average with 4 doubles and 4 steals in 4 games with the Perth Heat in the Aussie league. Kennelly batted .215 in 61 games with Reading in 2011.