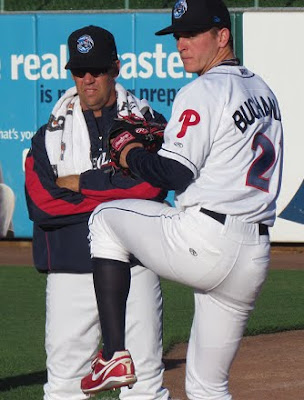 Lakewood pitching coach Steve Schrenk watches David Buchanan get loose
Selected by the Phillies in the 7th round of the amateur draft in 2010, righty hurler David Buchanan has quickly made a name for himself in the developmental ranks. The 22-year-old had an outstanding season this year, as he earned himself a spot as the starting pitcher for the north division team in the South Atlantic League All-Star Game while posting an 11-5 record with a 3.38 ERA through 20 starts with the Class A Lakewood BlueClaws.

Buchanan's exceptional efforts in his first full season as a pro also earned him a promotion to High A level Clearwater, where he went 3-2 with a 3.90 ERA in 6 outings.

A Georgia native, Buchanan grew up as a Braves fan, but is more than happy to be a part of the Philadelphia organization, home to several pitchers that he admires the same way he looked up to the famed Atlanta starting pitching staff of the 1990's.

The 6-foot-3-inch 190-pound Buchanan sports a low-90's fastball along with a sinker and a slider.

In August, Buchanan ranked 16th among Phillies prospects in a survey of minor league experts conducted by The Reading Eagle.

Below is some footage of the man known to his teammates as "Buck Nasty", warming up prior to a 2011 start in Lakewood.