By Jay Floyd November 03, 2011
The second season of the revamped Australian Baseball League gets under way this weekend. Over the years, the ABL had previous incarnations that failed. The current version debuted in 2010 as a new entity that is jointly owned by Major League Baseball (75%) and the Australian Baseball Federation (25%). The league features many American players and coaches, plenty of which are employed by MLB affiliated clubs in the United States.

The league down under consists of six teams and has the potential to grow in the coming years, provided the fan attention progresses with it. 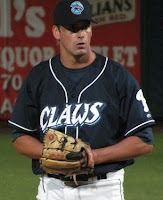 According to former Phillies minor league hurler Mike McGuire, who will pitch for the Canberra Cavalry, he's enjoying the exposure to a different culture and the popularity of the sport is growing greater.

"The experience has been great so far," McGuire said. "I'm staying with a great family and the people and Aussie players are so helpful, making sure (American players) are comfortable here. We start our season Friday night and, from what I've heard, we have the best fans in the league. The support here is tremendous, as baseball is getting more and more popular each year. They really appreciate Americans coming over and playing for the community."

McGuire, who pitched in relief for the Class A Advanced Clearwater Threshers and the Class A Lakewood BlueClaws in 2011, stands 6-feet-7-inches tall and weighs around 250 pounds. The big University of Delaware product will serve as the opening day starter for the Cavalry, according to manager Steve Schrenk, who was McGuire's pitching coach with Lakewood. 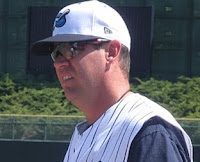 Schrenk, who pitched in the Major Leagues with the Phillies, has been coaching in the Philadelphia organization since 2004. The 42-year-old is excited for the new season to get underway and almost feels right at home, as he is surrounded by familiar settings at the baseball field and has some countrymen by his side.

"We have several pro players from the USA. Looks like our team is going to be good offensively with some strong starting pitching. Weather has been great. Ready to get going. Opening night is (Friday), Nov 4th."

The Cavalry's opening night contest is against the Brisbane Bandits, who are managed by another former Phillie, Kevin Jordan. The 41-year-old has been coaching in the Phillies organization since 2007.

Canberra and Brisbane were the two teams that missed the playoffs in last season's ABL action.

Stay tuned to PhoulBallz.com throughout the off-season for more updates from the Australian Baseball League and other winter organizations.