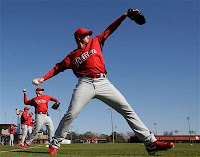 The Phillies announced on Tuesday that right-handed pitcher Scott Mathieson has been released, freeing him to pursue a contract with a team in Asia.

The 27-year-old was 1-4 with a 6.75 ERA in 15 big league games in his career. He held opponents scoreless in four relief outings this year for the Phillies.

Mathieson is secretive about his destination, stating exclusively to PhoulBallz.com that he has an agreement with the team he’ll be pitching for to not announce the signing before Friday, when that club expects to make the news public.

A source close to PhoulBallz.com has stated that the Yomiuri Giants in Japan will be the team that Mathieson is set to sign with.

The change is something that Mathieson is ready for and he expects to pitch outside of North America for the foreseeable future.

Three times a patient on the operating table, to undergo elbow surgery, Mathieson was originally a 17th round draft choice by the Phillies in 2002. The Vancouver native made his big league debut with the Phillies in 2006 and posted a 1-4 record with a 6.75 ERA before being sidelined with a torn elbow ligament that required Tommy John surgery. Multiple procedures and a lengthy recovery process followed. Mathieson landed back in the majors with the Phillies after four long years in 2010, however he found himself moving up and down between Triple-A Lehigh Valley and the Phillies throughout that season and the year that followed, appearing in very few games for the Phillies. Combined in 2010 and 2011, Mathieson recorded no decisions and posted a 2.70 ERA in 6 games with the Phillies.