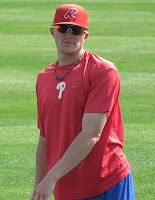 The Arizona Fall League's Rising Stars Game is set to be played on Saturday, November 5th at 8 PM EST. The exhibition contest that features many top prospects from all across baseball will be televised nationally on MLB Network.

Left-handed pitcher Jake Diekman, a 30th round draft choice in 2007, will be the Phillies' lone representative, as he will be among the relievers for the East division squad.

Thus far in 7 appearances for the Scottsdale Scorpions, the 6-foot-4-inch 190-pound Diekman has not allowed a run or a hit. In 7 1/3 innings, Diekman has struck out 9 opponents and walked 5.

Last year, Diekman was summoned to the Arizona Fall League late, to fill a roster void left when John Mayberry Jr. suffered an injury. Diekman's efforts weren't as outstanding during that stint, as he did not expect to compete in the AFL. Diekman had a difficult time adjusting to the surprise, allowing 12 earned runs in 3 2/3 innings over 5 outings.

Diekman discribes that experience as a disappointing one, but feels it was an opportunity to grow.

"That was a downer," Diekman stated. "That was probably the worst month I've ever had, both mentally and physically. But it teaches you how to throw backwards and throw all your pitches for strikes. Like, there might be some lead-off guys (in Double-A) that you know they're gonna swing first pitch, so you just drop a slider in there and freeze them. It just taught me how to pitch to hitters at a higher level."

Diekman, a Nebraska native, sports a pitch repertoire that includes a fastball, a slider and a change up. He added a couple notches of velocity this year after receiving advice from Williamsport pitching coach Lance Carter, in spring training, to lower his arm angle when playing long toss. The increased speed helped Diekman in match ups against opposing batters, as he saw his K/9 rate shoot up from 9.05 in 2010 to 11.49 in 2011.

As the Phillies move forward with several well-regarded righty hurlers like Justin De Fratus, Michael Schwimer, Phillippe Aumont, Trevor May, Austin Hyatt and others, Diekman is on a short list of left-handers that have the potential to reach the highest levels of the organization.

Diekman realizes it's a long road ahead to reach the big leagues. He has a simple mentality moving forward and a solid focus on what he needs to do in order to make his dreams a reality.

OBC said…
Yeah! Good to see there's secondary a lefty bullpen option for next yr besides Savery.
November 3, 2011 at 3:08 PM