Kennelly Living it Up, Down Under 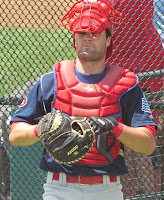 Australian native Tim Kennelly has been enjoying some serious success thus far in the 2011-2012 Australian Baseball League season. The righty hitting utility man is tearing up opposing pitching while playing for his hometown club in the second season of this current incarnation of professional baseball down under.

In the early going, the 25-year-old leads the ABL with a .529 batting average and has helped his club, the defending ABL champion Perth Heat, to a league-best 11-0 record, including an 8-0 mark on the road. Kennelly's 1.237 OPS is also tops in the league.

Kennelly has been a multi-positional player throughout his career in the minors, spending plenty of time at catcher, third base and in the outfield. Such versatility has helped Kennelly earn playing time within the Phillies organization. With the Heat, Kennelly is valuable to his team in the same manner, splitting his time at various spots.

Originally signed by the Phillies in 2003 at age 16, Kennelly has posted a .263 batting average with 18 homeruns and 210 RBI spanning 485 games played in 7 professional seasons. Kennelly had a rough season overall at the plate for Double-A level Reading in 2011, sporting a .215 average with 3 homeruns and 21 RBI in 61 games.

Recently, Kennelly filed for free agency, although he stands a good shot at rejoining the Phillies' developmental ranks for 2012, as his familiarity with the organization's hurlers and his ability to catch a crop of well-regarded pitching prospects expected to arrive at the Double-A level next season may work in his favor.

Harman has been sharp for Melbourne, posting a .423 avg. with 4 doubles, 2 HR and 7 RBI in 7 games played. The 6-foot-7-inch McGuire has been exceptional for Canberra, going 1-0 with a 0.47 ERA and 26 strike outs and 6 walks in 19 1/3 innings over 4 games, 3 of which were starts. Schoenberger has not seen game action to date for Brisbane. Naughton has batted .231 with a homer and 4 RBI in 8 games with Brisbane.