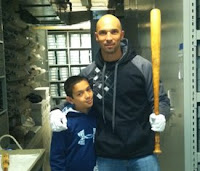 It's every player's dream to be enshrined in the National Baseball Hall of Fame. For Raul Ibanez, who hasn't had the sort of career that would ensure his face would one day be cast in bronze and displayed on the Hall walls, it was necessary to find a less common way to earn a spot in the annals of baseball history. Recently, Ibanez became the very first big league player to spend the night in the plaque gallery at the storied Hall of Fame.

As detailed on the National Baseball Hall of Fame's website, Ibanez accompanied his son's Little League travel team to the Hall, where they participated in the Museum's "Extra Innings Overnight", a program that allows groups to travel to Cooperstown, NY in order learn more about the great game of baseball.

The article on the Hall of Fame's website quoted Ibanez as being excited to see some recent Phillies milestones represented among the all-time great historical moments of the sport.

"I am most amazed at how beautifully the game is being preserved here in Cooperstown," Raul Sr. said. "You see things that are legendary. Not just the excellence of the Hall of Fame, but the snapshots in time, where, for one moment, you were involved in something great. I texted (former Phillies teammate) Eric Bruntlett a photo of his jersey from his unassisted triple play, and he was so fired up to see it. Also, (teammate) Wilson Valdez's cap from this year (when Valdez, a position player, earned a victory on the mound in an extra-inning game). To be on the field for both of those moments that are represented in the Hall of Fame, it really hit home what it is to be part of the history of the game."

Raul Sr. is currently a free agent. The 39-year-old veteran outfielder played three seasons with Philadelphia. He posted a .245 average with 20 homeruns and 84 RBI in 144 games for the Phillies in 2011.