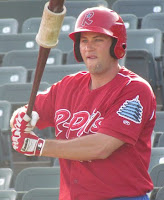 Today we're taking a glance at Phillies developmental talents playing for the Scottsdale Scorpions in the Arizona Fall League, through Sunday, November 6th.

First baseman/third baseman Cody Overbeck has been excellent, posting a .339 average with 2 doubles, a triple, a HR and 6 RBI through 17 AFL games. The 25-year-old Overbeck, also sports an on-base percentage of .451. The righty batting slugger mashed 24 regular season homeruns, combined, for Double-A Reading and Triple-A Lehigh Valley in 2011.

Outfielder Tyson Gillies has played in 19 games and posted an unimpressive .197 with 2 doubles and a homerun, 5 RBI and 12 walks. The 23-year-old Gillies, who has been sidelined with hamstring and foot injuries over the past two years, has only made one stolen base attempt in AFL play.

In 6 relief outings, B.J. Rosenberg has not looked too solid, posting a 0-1 record with a 5.14 ERA. The 26-year-old righty was once a fast rising relief prospect, but has had a difficult time over the past two years after pitching for Team USA following the 2009 season. 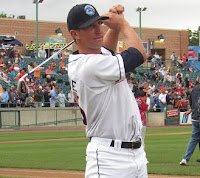 23-year-old right-hander Colby Shreve had also struggled, walking just as many as he has struck out, 7, while serving up a .324 opponents batting average and tallying a 6.00 ERA through 8 AFL appearances. Shreve had some ups and downs during the 2011 regular season, moving from the starting rotation to the bullpen for Class A Lakewood, but improved in relief and earned a promotion to High A Clearwater. Overall in 40 regular season games, Shreve posted a 2.87 ERA and a .268 batting average against while striking out 79 batters in 84 2/3 innings.

On a better note, lefty pitcher Jake Diekman has allowed just 1 hit in 8 1/3 innings without serving up an earned run. The 24-year-old reliever took part in the AFL Rising Stars Game on Saturday, throwing 2/3 of an inning without being charged a run. Diekman held opponents to a .199 batting average during the 2011 regular season with Reading. In addition, the Nebraska native averaged 11.49 strike outs per 9 innings this past season.