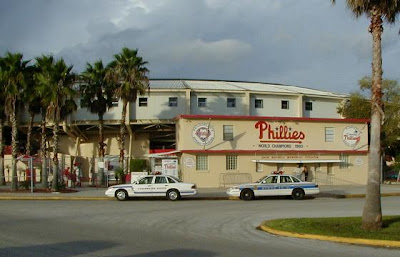 Jack Russell Memorial Stadium in 2003
Currently housed at Bright House Field in Clearwater, FL, the Phillies once called a different Florida complex their southern home. Jack Russell Stadium was home to the big league club from Philadelphia for spring training dating all the way back to 1955 until 2003 when the relocated to the newly built facility in another part of town. These days, the park that was named after a former big league player and Clearwater city commissioner is disassembled and has remained as an inactive lot, only used for overflow parking, and the like, since the Phillies departed for fresher digs.

Community clamor and a struggling economy resulted in plans for housing, in place of the decades old home for Phillies spring training and minor league baseball, to fall apart. Nothing is both what has happened in the period since professional sports vacated the premises and what goes on at the site these days.

In the midst of what is described as a low-income neighborhood, the open grounds have come to be a source of stress and bother for the area, as high hopes met a down time for development. However, a plan now in the works has spirits on the rise again with potential to provide a recreational home to neighborhood children.

According to the St. Petersburg Times, the local parks and recreation department presented a proposal for rebuilding the site to the City Council last week. The plan would be to build two multipurpose fields, parking, fencing and lighting on the site as a home for North Greenwood neighborhood children's teams to play on.

In years past, local youths had called a nearby field home, for football and cheerleading, but after discovering landfill debris presenting a problem underneath the playing surface, the location was shut down. That decision resulted in the roughly 270 children that once played there having to steadily travel to multiple locations across the region to stay active.

Currently, officials are researching the new proposal for the fields on the former Jack Russell Stadium site. It could take months before any decision is made by the council. While the cost of the project has been of great concern, with budgetary issues forecast for the coming year, the plans have a strong possibility of coming to fruition, as it stands as a tremendous way to build long-term returns for the community through the lives of its children.