By Jay Floyd June 07, 2011
When the Class A South Atlanic League All-star Game gets underway on Tuesday, June 21st, in Salisbury, MD, five Lakewood BlueClaws will be there representing the Northern Division.

On Tuesday it was announced that pitchers David Buchanan, Garett Claypool and Lisalberto Bonilla will join first baseman Jim Murphy and outfielder Anthony Hewitt will all represent the two-time defending league champions in the annual exhibition.

Lakewood's five representatives ties Hagerstown for most by a team from the Northern Division. 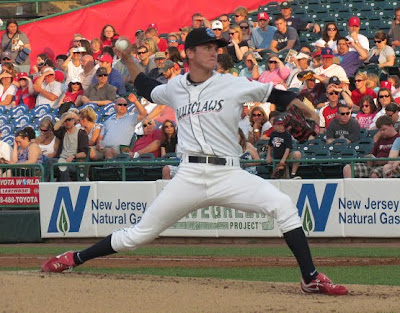 David Buchanan in action against Hagerstown in May

Buchanan, a Georgia native, is slated to start the SAL All-star Game for the Northern Division. Buchanan, 22, was a 7th round draft selection by the Phillies last year. In 11 starts, Buchanan has posted a 7-2 record with a 2.15 ERA. His teammates playfully refer to the right-handed Buchanan as "Buck Nasty".

Claypool, a UCLA product, began the season in the bullpen, but has since proven himself worthy of a starting spot. In 13 games, Claypool is 1-3 with a 2.97 ERA and has struck out 70 batters in 57 2/3 innings. An 11th round draft selection by the Phillies last year, the 22-year-old righty grew up as a fan of the Dodgers in California.

Bonilla, a righty reliever who joined the club on May 3rd when Eric Pettis was promoted to Clearwater, has appeared in just 10 games for the 'Claws, but has made a serious impact in his 5 weeks with the club. In those 10 appearances, the Dominican Republic native has a 0-1 record, a 1.16 ERA and has held opponents to a .116 batting average. Additionally, Bonilla has struck out 23 and walked only 6 batter in 23 1/3 innings pitched. The 21-year-old was signed as a free agent by the Phillies in December, 2008. 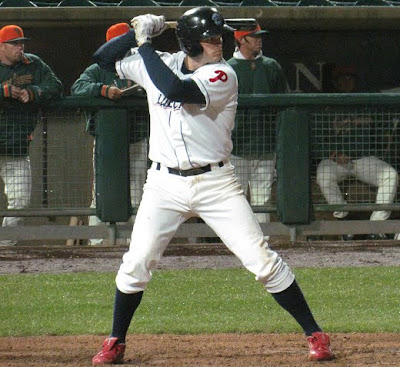 Jim Murphy in action against Greensboro during May

Murphy, a 24-year-old, is back for his second stint with the BlueClaws and became the all-time club HR leader this season, with a total of 27 that he continues to add to. In 59 games in 2011, Murphy has posted a .289 batting average while smashing 13 homers and driving in 43 runs. In an organization loaded with first base prospects, the room for Murphy to advance upward is limited. The right-handed hitting Murphy was a 17th round draft pick in the 2006 MLB draft.

Hewitt, a 1st round draft choice by the Phillies in 2008, has improved a great deal in 2011 after posting a .208 batting average over his first three season in the minors. This year, in 48 games, Hewitt is batting .258 with 11 doubles, 4 triples, 7 homeruns, 26 RBI and 15 stolen bases. The 22-year-old righty batter reported to spring training in January, more than six weeks ahead of the required minor league report date.

The group of five all-stars is the third most in franchise history. Previously, the BlueClaws had seven all-stars in 2007 and six in 2009.

The South Atlantic League All-star Game will be hosted by the Orioles Class A affiliate, the Delmarva Shorebirds. Details on the event can be found by clicking here.