Murphy a Leader For Class A Lakewood 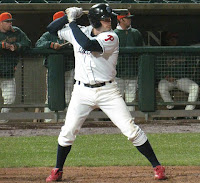 LAKEWOOD, NJ- Right-handed slugger Jim Murphy knows that the first base position within the Phillies organization is cluttered. With former National League Most Valuable Player Ryan Howard signed with the Phillies through the 2017 season for big money, and names like Matt Rizzotti (.296 avg, 13 HR, 45 RBI in 67 games with Double A Reading this year), Cody Overbeck (.266 avg, 19 HR, 47 RBI in 66 combined games for Reading and Triple A Lehigh Valley), Joe Savery (.303 avg, 2 HR, 25 RBI in 57 combined games for High A Clearwater and Reading) and top Phillies positional prospect "The Boss" Jonathan Singleton (.244, 3 HR, 21 RBI in 57 games for Clearwater) all currently occupying spots ahead of Murphy within the Phils' developmental system, there is limited room to advance, no matter how he performs.

This season Murphy is blazing through South Atlantic League pitching. In 67 games with the Class A Lakewood BlueClaws, Murphy is batting .286 and is tied for the league lead with 17 homeruns and 53 RBI. The outstanding numbers have earned Murphy a starting spot on the SAL North division All-star team, slated to be played Tuesday night at Arthur W. Perdue Stadium in Salisbury, MD, home of the Delmarva Shorebirds (Orioles affiliate).

Murphy was especially hot in the month of May, when he sported a .318 batting average, with 15 doubles, 6 homers and 23 RBI in 29 games en route to locking down a nod as Phillies Minor League Player of the Month.

While he's not especially happy with his current situation, back with the same team he helped win a league championship two years ago, the 25-year-old Murphy is excited to be representing his team and the Phillies organization as an All-star.

"It's definitely a huge honor to get player of the month for the Phillies and also to be an all-star," Murphy stated. "There's a lot of good players in this league and I thought there were a couple of other guys that were deserving. One from West Virginia that already got moved up was (Matt) Curry- he was having a heck of a year. But I'm glad to get the nod to go to the All-star Game. It'll be a good time."

Murphy will also take part in the pre-game homerun derby, prior to the All-star exhibition festivities, when he will compete against teammate Anthony Hewitt, Hagerstown's Bryce Harper, Lexington's Chris Wallace and several others.

The Washington native, Murphy, spent some time with the Phillies in big league camp during spring training. In 2 games of Grapefruit League action, Murphy was held without a hit in 5 at bats.

Originally a 17th round draft choice by Philadelphia in 2006 out of Washington State University, Murphy knows that the Phillies aren't the only possibility out there for him to climb back upward on the ladder toward the big leagues. He has been focused on showcasing himself for other teams that might be watching, in addition to his own organization's talent evaluators.

"I just want to put up my numbers and I don't want to waste any at bats," Murphy said. "I just want to see what happens. There's a lot of other teams out there that we play against. I don't know how many organizations are in this league, but everybody is watching and there are scouts at every game. I just want to go out and not waste any at bats and have a good approach (and if I keep posting) good numbers, somebody might look at it and say, 'Hey, give this guy a shot.'

Lakewood manager and former Major Leaguer Chris Truby feels the presence of Murphy benefits the team in more ways than just offensive production. Truby speaks highly of the the 6-foot-4-inch 240-pound prospect, expressing the importance of Murphy's role as a leader to younger players.

With the trading deadline approaching and the attendance of scouts from other clubs set to be at a maximum level, Murphy, the BlueClaws' all-time HR and RBI leader, might be crossing his fingers that an organization which happens to be a bit more light on minor league first basemen will decide to reach out to the Phillies to acquire the Class A stud. If that doesn't happen, however, Murphy will continue to take pride in his approach to the game he loves and strive to do his best. And while others credit Murphy for setting examples for players coming up behind him, the man himself doesn't take that sort of credit. He considers himself just one of the guys.

"I just want to go out and play hard every day and play with my teammates and have a good time and keep grinding. I enjoy playing the game. I'm just happy to get to play another full season."