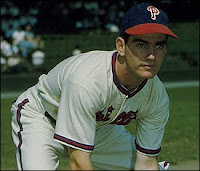 During the 1944 season, 16-year-old Ralph "Putsy" Caballero became the youngest Phillie in team history when he broke into the Major Leagues. Signed out of high school by the Phillies that year, Caballero reached the big show in September for the final few weeks of the season. He played in parts of 8 different seasons as a member of the Phillies, mostly as a reserve infielder.

In his debut season, the right-handed hitting Caballero went 0-for-4 in 4 games and then went hitless in 9 appearances the following season at the big league level.

Caballero, a Louisiana native, missed the 1946 season, as he was summoned for military service. He later achieved his first Major League hit in 1947.

In 1948, still very young for the highest level of the sport, at 20-years-old, Caballero saw action in 113 games with the Phillies, spending time at second base and third base. That season, Caballero hit .245 with 12 doubles a triple and 33 runs scored.

With minimal power, Caballero hit just 1 career Major League homerun and had a career OPS of .547.

In 1950, Caballero played in 46 regular season games as a member of the famed Whiz Kids team that reached the World Series. It was the Philadelphia organization's first trip to the Fall Classic in 35 years. Caballero went 0-for-3 in the World Series against the Yankees.

At the age of 24, Caballero, who stood 5 feet 10 inches tall and weighed around 170 pounds, played his last game at the Major League level. He played three more seasons in the minors, before retiring following the 1955 season.

After his baseball days were through, Caballero returned home to New Orleans, where he operated a pest-control business for many years. In 2005, Caballero's home in Lake View, LA was destroyed by Hurricane Katrina.

Caballero lost nearly all of his belongings in the catastrophe of the hurricane, but among the few things he managed to salvage were his entire uniform from that 1950 season and his National League championship ring.

A father to seven and a grandfather to more, Putsy Caballero values his memories of his big league days more than all the memorabilia and personal belongings he lost. According to Audrey Nuss, Caballero's youngest daughter, he still speaks of his time in the game as though it was yesterday.