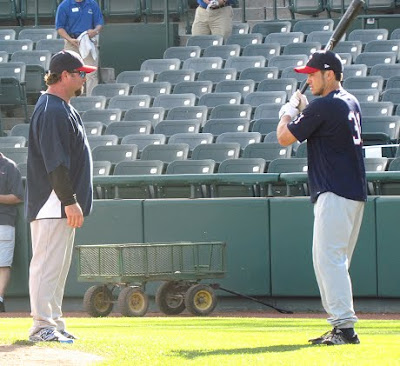 NH hitting coach Justin Mashore working with Travis d'Arnaud last week
Sidelined in late April with a concussion, suffered when he was hit with the swing of a batter, catching prospect Travis d'Arnaud began the season in quite a slump. Through 13 games in April with the Double A New Hampshire Fisher Cats, d'Arnaud had posted a .188 batting average with 1 HR and 5 RBI.

However, since returning from the disabled list in early May, d'Arnaud has been on a hot streak, ripping into Eastern League pitching to the tune of a .378 batting average with 9 doubles, 5 homeruns and 12 RBI in 27 games.

The 22-year-old California native asserted that he hasn't changed anything in his approach or mechanics, confirming that sometimes a hitter can just get into a groove and capitalize on that.

"I've been slowing everything down and I feel like the ball looks like a softball right now. I can see it really good," d'Arnaud stated. "When I got on a roll, I was just seeing the ball well and putting good swings on it."

In regards to his slow start and an increase of power (.928 OPS through 40 games played, while a previous season high in OPS was .831 in a 2008 season he split between short-season Williamsport and Class A Lakewood in the Phillies organization), the righty hitting d'Arnaud feels that he's steadily showing the type of hitter he's developing into.

"This year I've hit stretches where my timing's off a little bit, but I've made no changes and gotten some good results," d'Arnaud said.

d'Arnaud was originally drafted in the supplemental round (37th overall) in 2007 by the Phillies. He was later traded to Toronto among a trio of player dealt for ace pitcher Roy Halladay in December, 2009. Last off-season, d'Arnaud was ranked as the 4th best prospect in the Toronto system by Baseball America.

Defensively, d'Arnaud has always shined, earning nods from his pitching staff at every level he's played for assisting in their success and progress.

His ability to lead will certainly help d'Arnaud advance in the professional ranks and even his coaching staff has sees a bright future for the 2010 Class A Florida State League All-star. Fisher Cats hitting coach Justin Mashore is pleased to be working with such talented prospects in New Hampshire and has worked closely with d'Arnaud. Mashore agrees that d'Arnaud is going about hitting the same way since arriving in Double A.

"(His) consistent work and his approach is what's allowing (d'Arnaud) to drive the ball more," Mashore said. "Travis has got phenomenal hands. Hopefully, (he) can continue to climb where we hope he goes."