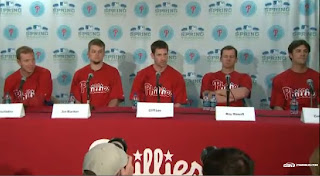 Many baseball fans will recall all the hype surrounding the Phillies' pitching rotation leading into the season. After Philadelphia snatched free agent Cliff Lee up, before the Rangers or the Yankees could lock him into a contract, the baseball world seemed to buzz for months about the potential of the Phillies' starting pitchers for the 2011 season.

As the team has reached the 75 games plateau in the 2011 season, the Phillies' 47-28 record is the best record in Major League Baseball and, as should have been expected, they have their pitching staff to thank for it.

Overall, the Phillies' pitching staff leads the Majors in ERA, with a 2.98 mark, but the staff has been led by three members of their starting rotation...especially over the past month.

Adding together statistics from each of Cole Hamels', Roy Halladay's and Cliff Lee's past 7 starts, the sums are remarkable. The trio has combined for a 15-2 record and a 2.17 ERA while allowing just 24 walks and striking out 141 batters in 153 2/3 innings pitched.

Veteran right-hander Roy Oswalt hasn't been quite as sharp as his previously mentioned staff mates over the same stretch. Oswalt has posted a 1-4 record and a 3.40 ERA over his previous 7 starts, dating back to mid-May.

Fifth starter Joe Blanton posted a 1-2 record with a 5.50 ERA through 6 starts, prior to landing on the disabled list with elbow inflammation for the second time in mid-May.

Recent shortcomings of the core four plus one aside, even the team's relievers have prevailed as a strength of the club and are among the best in baseball. The bullpen's 2.80 ERA ranks second best in the big leagues and their .226 batting average against is 5th best in the Majors.

Plenty of analysts and writers have pointed out that the offense has to reduce their struggles producing runs if the team is going to reach the World Series, but with a pitching staff like this that shuts down the opposition with sheer dominance on a steady basis, the Phillies' offense shouldn't be a source of too much worry.
_________________________________________