Mattair Headed for Return to Lakewood 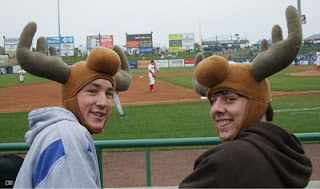 Moose-keteers get your headgear ready, as your namesake is headed back to the home of the greatest fan group in Class A baseball history.

Ready to be activated from an oblique strain that has kept him out of action since April, Travis "Moose" Mattair is set to see action this weekend with the two-time defending South Atlantic League champions, the Lakewood BlueClaws.

Mattair, a 2nd round draft pick in 2007, developed quite a fan following in 2008 and 2009 when manned third base for Lakewood. The 6-foot-5-inch 220-pound Mattair held the BlueClaws all-time RBI record with 91 before Ryan Howard broke the mark during a rehab assignment with Lakewood last year. First baseman Jim Murphy has since surpassed both men, during his second campaign with the club this season.

Following the 2009 season, Mattair temporarily retired from baseball, in order to try his hand at Division 1 college basketball. After attempting a bit of an audition with Boise State in 2010, Moose returned to baseball this year and reported to spring training early, in January, in order to get back into the swing of things.

The 22-year-old Mattair had posted a .234 batting average with 3 homeruns and 16 RBI in 21 games with the Class A Advanced Clearwater Threshers, prior to experiencing the injury in a game against Lakeland on April 28th.

Speaking exclusively with PhoulBallz.com, Mattair expressed a desire to always play at the highest level possible at any particular time, but explained that the Phillies feel that the best place for Mattair, coming of his injury, is Lakewood right now and Mattair says he's accepting of that decision.

"I am headed there (Friday) morning and I hope to be in the lineup," Mattair said. "I want to play, that is the bottom line. If I have a uniform on, I am getting consistent everyday at bats and I have my sites set on the big leagues, I am fine.

"I love baseball no matter when or where I am playing it."