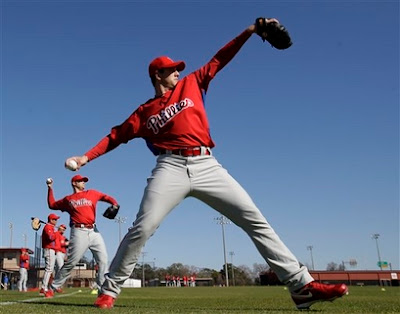 PAWTUCKET, RI- Phillies minor league hurler Scott Mathieson has dealt with a lot of obstacles in his career. Three times a patient on the operating table, to undergo elbow surgery, Mathieson was originally a 17th round draft choice by the Phillies in 2002.

The Vancouver, BC native made his Major League debut with the Phillies as a starting pitcher in June, 2006. However, by September that season, Mathieson was sidelined with a torn elbow ligament and required Tommy John surgery. As he rehabbed the following year, it was discovered that Mathieson had lingering issues that would force him to undergo an ulnar nerve transposition procedure. Bouncing back from that surgery proved difficult in 2008, when Mathieson was forced to have a second Tommy John surgery.

Prior to the surgical procedures, Mathieson had pitched mainly as a starter. However, since returning from that third stint on the disabled list, and working his way back up through the Phillies developmental system, the 6-foot-3-inch 220-pound Mathieson has pitched exclusively in relief.

This year, Mathieson began the season with Lehigh Valley, but has appeared in 2 games with the Major League club, throwing 3 scoreless innings.

The switch, according to Mathieson, is a welcome change that he says he is ready for.

"I really liked closing last year and pitching out of the bullpen, but I believe I can still start and be a starter at the big league level," Mathieson said.

The switch is not just a spot start, brought on by the organization's recent roster maneuvers. While there is a need, Mathieson is a strong individual that should adapt going forward.

"This isn't just a temporary start. I'm in the rotation now," Mathieson said.

Making his first start since the 2007 season, Mathieson says he expects to be good for 60-70 pitches on Sunday, when he faces the Pawtucket Red Sox at McCoy Stadium, and is looking forward to stretching himself out over the outings to follow.