Savery Back on Mound, Future is Unclear 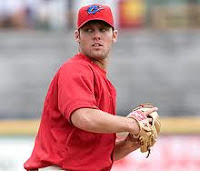 Monday night, Joe Savery pitched 2 scoreless innings of relief for the Double A Reading Phillies. A year ago, this information may not have surprised too many people. However, this season, since Savery was converted from pitcher to full-time hitter, it caught plenty of folks by surprise.

With Reading in the midst of a stretch of their schedule when they have no days off for more than three weeks and the organization promoting players upward, as injuries command, the R-Phils have been in need of some extra pitching. The 25-year-old Savery, who was drafted in the 1st round by the Phillies in 2007 and pitched four professional seasons, fits the bill to supplement the club's needs.

Reading manager Mark Parent addressed the matter today, stating that at the time of Savery's mid-June promotion from Class A Advanced Clearwater, it was known that the left-hander could slide into a relief role at some point.

"When he was sent here to DH and to get at bats, to see how he was able handle pitching at this level, he also began to throw bullpen sessions and be available to use in the 'pen at an undetermined time," Parent said in an exclusive interview.

"We needed a couple of innings covered last night and he stepped up and really helped us out," Parent added.

Savery posted a 1-12 record with a 4.66 ERA in 28 games for the Triple A Lehigh Valley IronPigs last season, before getting a chance as an everyday player.

Earlier this season, a 23-inning marathon in late May for the Clearwater Threshers forced Savery's initial return to the mound. Savery, who started the game as the designated hitter, tossed 2 scoreless innings that night in Jupiter, FL.

What the future exactly holds for the 6-foot-3-inch 220-pounder remains to be seen and is up to the two men in charge of the Phillies' developmental system, pitching coordinator Gorman Heimueller and assistant general manager in charge of player development Chuck LaMar, according to Parent.