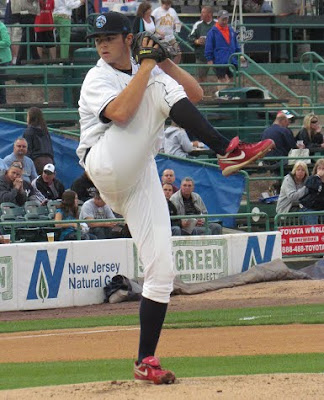 LAKEWOOD, NJ- The Phillies' 2010 first round draft pick Jesse Biddle had a difficult opening stretch in his first full season as a professional this year, but has since bounced back and learned how to cope with the rigors of professional baseball.

Following a period in which he struggled with his command and seemed to repeatedly let up one big inning to his opponents, Biddle has adapted to the new full season environment and produced effectively for the Class A Lakewood BlueClaws in the South Atlantic League.

After beginning the season with a 1-5 record and a 5.57 ERA through his first 7 starts, the left-handed Biddle has gotten himself on the right track, posting a 2-1 record and a 2.60 ERA in his last 6 outings. Biddle feels that a confidence in his own pitching abilities, despite some concerns and doubts about those skills, is what has helped him to improve.

"I think earlier I was putting a lot of pressure on myself and kind of just second guessing my stuff and why (the Phillies) drafted me," Biddle said. "You have questions like that when you're struggling and you start doubting who you are. But I just gotta remember that I'm one of the youngest guys in the league, and one of the youngest guys in this clubhouse, and there's a reason why the Phillies picked me (in the 1st round) and I just need to go out there and prove it. I just need to throw the ball, throw strikes and get guys out."

Biddle feels that his up and down performances will serve as somewhat of a series of lessons, going forward. With some weak performances weighing on his mind early in the season, Biddle's now got a string of solid outings to build on, which have enabled him to bask in some success and get away from drowning in an ocean of regrets.

"When you walk 5 guys and give up 6 runs in 3 innings, it's a whirlwind of, like, you can't really focus on one pitch," Biddle said. "You just let everything bother you.

"It's pretty amazing how baseball works. One outing, you're good. One outing, you're bad. And then a bunch- you're in the middle. So it's really a matter of finding that in between. That's something that I've been working on and kind of trying to keep a level head.

The matured mentality that has helped Biddle make improvements this season with the BlueClaws is the sort of advice the 19-year-old would pass along toward this year's draftees coming straight out of high school.

"It's all about trusting yourself and remembering that this is the same game you played in high school. And yes, the game's faster and you're playing with different guys, but I'm still pitching 60-feet-6-inches, the plate's the same size. It's all about trusting yourself and knowing that you got drafted for a reason. The Phillies have faith in you and it's just a matter of having faith in yourself."

In his most recent start, a no decision against the Hagerstown Suns (Nationals affiliate) on Tuesday, Biddle got touched up early, giving up a homerun following a walk in the 1st inning, which put the BlueClaws in a 2-0 hole. A quick word of encouragement from his pitching coach Steve Schrenk helped Biddle to refocus and allow only one more hit through the remaining 5 innings of his outing, en route to a season high 9 strike outs.

"He told me, 'That's all they're gonna get!' and that's all he really had to say, that's all I needed to hear. And that's how I felt. It's all about holding them and giving my team a chance to win." Biddle said.

During that start, Biddle's parents, his girlfriend and his 3rd grade teacher were in attendance at Lakewood's FirstEnergy Park to cheer him on. Biddle, a Philadelphia native who grew up as a Phillies fan, enjoys playing close to home. According to 6-foot-4-inch 225-pounder, a close support system really helps him focus.

"It's nice to have those people around at all times," Biddle stated. "They're going to be there, no matter how I do and that means a lot to me. It really does."

Regardless of the outcome, Biddle knows his family will stand by him and that they'll still take him out to dinner afterward, which is one of the few things Biddle knew about his future prior to signing his first professional contract with the Phillies. The rest, he is learning as he goes.