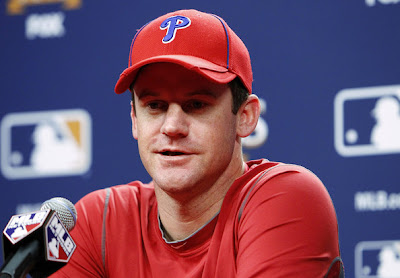 After leaving his last start early with lower back tightness, Roy Oswalt is back to work, on schedule, as the Phillies (11-6) travel to San Diego to take on the Padres (8-10) in a 4-game series.

Oswalt, who has a history of back injuries in his career prior to coming to Philadelphia in a trade with Houston last summer, will start the series opener for Philadelphia. The Padres will counter with right-hander Mat Latos, who began the season on the disabled list with shoulder fatigue.

The Phillies won 5 of 7 meetings with the Padres in 2010. Read ahead for details on the pitching match ups for this series as well as loads more statistics and info.


Placido Polanco's 15 RBI are tied for second best in the National League. In 48 career games against the Padres, Polanco is a .335 hitter.

Jimmy Rollins, who has been batting 3rd in the Phillies' lineup, in Chase Utley's absence, has just 1 RBI in 17 games this season. Rollins is 0-for-8 in his career against Padres closer Heath Bell.

In 16 career games against the Phillies, Chase Headley has a .224 batting average.