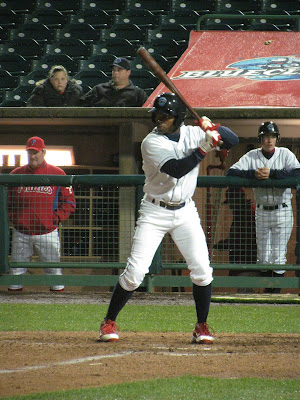 LAKEWOOD, NJ- For Zach Collier, a year away from baseball served as a lesson for what is important to him. The 20-year-old outfielder missed the entire 2010 season with various injuries and is back attempting to climb the ladder in the Phillies' developmental system this year with the Class A Lakewood BlueClaws.

After being selected out of high school in the supplementary round (34th overall) of the 2008 amateur draft, making his pro debut with the Gulf Coast League Phillies that year and a shaky campaign in 2009, in which he spent time with Lakewood and the short-season Williamsport Crosscutters, while batting .221 in 116 games combined at the two levels, Collier experienced repeated injuries in 2010 that began prior to spring training and kept him from competing for the entire season.

Heading into spring training in 2010, the 6-foot-2-inch 185-pound Collier was dealing with a break of the hamate bone in his right hand that required surgery. In the process of doing rehab work for his hand, Collier suffered a left quadriceps strain in April that set him back further and became recurring. Shortly after that, in May, Collier tore a tendon in his right wrist, which ended his season.

The lengthy time off from playing helped Collier develop patience, as he did not take the news well, once the Phillies' rehabilitation coordinator Brian Cammarota informed Collier that he needed to shut down for the season and allow his body time to heal. After realizing that keeping his mind focused on a quick return wasn't helping, Collier reposed, accepted the situation and began to get his mind and his body right in order to bounce back for the 2011 season.

Collier, who bats and throws lefty, described the feeling of being able to finally play in a meaningful regular season game this season as one of the better moments of his professional career.

The California native is well aware of the high expectations that surround a player taken in such a high draft spot. Collier feels the same way the organization and its fans do toward the sort of success he is anticipated to have in his career.

"I'm very goal oriented. I just want to continue to do the things that I know I can do. (The Phillies) drafted me, so they believe in my abilities to play baseball. As long as I continue to believe in myself, I feel I can very well reach a lot of (my own) goals and move up and pretty much accomplish what they expect out of me," Collier said.

Spring training provided some time for Collier to work off any rust that may have developed during his time off and he was pleased with his own performances prior to the start of the regular season. The repetitions of being back on an everyday schedule were key for the speedy outfielder, who stole 20 bases in 2009 and has 5 steals already this year, to get back to feeling normal.

No part of Collier wished to hold back and play gingerly or give anything less than 100 percent when he began regular workouts and game action at spring training in Clearwater, FL. He felt the time off was plenty for his injuries to heal and he wouldn't get anywhere by taking it easy on his body. Recently, Collier stressed his own matching desire to the Phillies' wishes for their athletes to play aggressively as something that kept him focused on not holding back.

"Once I (tested it), I knew it was good and I could go hard. The Phillies expect everyone to play hard and that's pretty much my outlook as well. That's my main goal," Collier stated.

Collier credits another Phillies minor league outfielder, 28-year-old Jeremy Slayden, who also dealt with a calf issue following his 2009 season as well as other ailments recently, with providing some assistance in staying mentally focused throughout his time on the shelf, while rehabbing the injuries.

"His advice was (uplifting). He'd talk to me about the injuries, keep me focused, tell me to get to know my own body and get to know what my limitations are. He really just helped me stay positive (throughout the process)," Collier said of Slayden, who is currently on Double A Reading's disabled list.

Aside from the obvious goal of staying healthy, Collier has other aspirations for his 2011 season and beyond. Despite a slow start, in which Collier is batting .143 with no RBI through 8 games, Collier's short term plans are pretty big, as he hopes to strive to bring a third consecutive South Atlantic League championship to Lakewood and earn a promotion or two.

"Back-to-back-to-back would be very nice. It's good to have something to look forward to. I kind of feel like we have a good chance of (winning the league title) again. However, my goals will always be to reach the next level. If I'm here with Lakewood, that means getting to Clearwater. If I went to Clearwater tomorrow, then it would be to get to Reading by the end of the season."

It will remain up to Collier to accomplish what he can as he embraces the highs and lows of professional baseball.