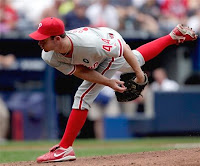 The Phillies announced on Wednesday that starting pitcher Roy Oswalt has left the team to deal with family concerns in his native Mississippi.

Oswalt's hometown of Weir, MS has suffered through devastating storms in recent days, so the righty hurler decided that it was best to travel home and be with his family.

"There has been a tremendous amount of tornado activity near Roy's home in Mississippi resulting in several tragic deaths and significant devastation to the area," it said. "Because of this, Roy is concerned about his family's wellbeing. He has chosen to take time to make sure there wasn't significant damage to his home, but more importantly, to make certain that his wife and children are okay.

Initially, Oswalt's quick departure from Chase Field without speaking to the media, following an early departure against the Diamondbacks on Tuesday, caused speculation that perhaps Oswalt was injured. The 3-time National League All-star Oswalt allowed 5 earned runs in 3 innings, taking his first loss of the season and his first regular season loss since his debut with Philadelphia last July, following a trade Houston.

Oswalt now has a 3-1 record with a 3.33 ERA and .212 batting average against in 5 games this season. Overall with the Phillies, Oswalt sports an 11-3 record, included last year's postseason.

The Amaro statement mentioned that Oswalt's parents' home was destroyed by a tornado nearly a year ago. It also added that the Phillies currently expect that Oswalt will rejoin the team in time to make his next scheduled start.