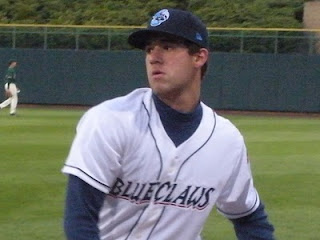 In Sunday's Clearwater Threshers contest against the Dunedin Blue Jays, highly regarded starting pitcher Brody Colvin was pulled from the game after pitching just 2 innings in his High A level debut. In the game, Colvin's pitch count was reportedly on the high side and he gave up 3 hits, walked 1 batter, struck out none and was charged with 3 runs, 2 of which were earned.

According to two sources within the Phillies organization, the circumstances related to Colvin's brief outing were "not serious".

Those who follow the minors closely might recall top pitching prospect Jarred Cosart's brief 2/3 inning outing last June in Delmarva, when he was a member of the Class A Lakewood BlueClaws. The initial statement on Cosart's early removal was that the decision was simply related to his high pitch count. However, it was later revealed that Cosart left the game with elbow discomfort and he missed the remainder of the season, as he allowed the ailment to heal.

**Update, Monday 5:03 PM- Reports out of Florida state that Brody Colvin has been placed on the 7-day disabled list with a back ailment. The team currently stands by the "not serious" label as it pertains to the situation.

If more updates become available regarding Colvin's status, you can find them right here.

tony said…
It is bound to be worse than the team wants people to think.