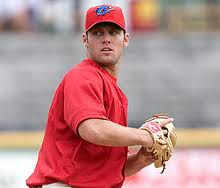 Former Phillies top draft pick Joe Savery has been on an early season rampage since the minor league season began on Thursday. The 25-year-old is beginning his first full professional season as an everyday offensive player, after the Phillies made the decision late last season to convert the 6-foot-3-inch specimen from a pitcher.

Savery was selected 19th overall by Philadelphia in the opening round of the 2007 amateur draft out of Rice University.

In four seasons as a pitcher in the Phillies' organization, Savery posted a 28-31 record with a 4.29 ERA. The Texas native was named an all-star of the Double A Eastern League in 2009 when he posted a 12-4 record before being promoted to Triple A Lehigh Valley.

Now, down a pair of levels and focusing strictly on hitting, Savery is off to a scorching hot start and has helped the Clearwater Threshers achieve a franchise best start by winning each of its first four contests. In a four-game series over the weekend, against the Dunedin Blue Jays, Savery ripped nearly everything that came his way, going 12-for-15 (.800 avg) with 2 doubles and a homerun. Savery's OPS stands at an astounding 1.946.

This is not Savery's first go around as a hitter because, much like many collegiate pitchers, he played a position when he wasn't on the mound prior to turning pro. As a freshman at Rice in 2005, Savery led the Western Athletic Conference in batting with a .382 batting average and was named to the all-conference team as a pitcher and a first baseman. He was also named National Freshman of the Year. One year later, Savery continued to excel, when he sported a .335 average with 66 RBI in 68 games played with the Owls. In 2007, prior to being drafted by the Phillies, Savery led his team in hitting.

While Savery's ceiling as a hurler was once in question, the inquiry that now resounds is "How early can a player's performance command a promotion?" If there was ever a prospect who proved himself a graduate of a league after four games, it could very well be the offensive catalyst Joe Savery with the Threshers of the Florida State League here in 2011.