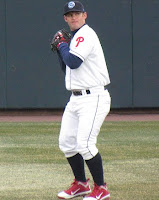 LAKEWOOD, NJ- Minor leaguer Jeremy Barnes is starting out the 2011 season with the same team he was with last year, but if you ask Barnes, he'd tell you that he has absolutely made progress. Barnes, an infielder with the Class A Lakewood BlueClaws, spent his winter in the home town of his MLB parent club, the Philadelphia Phillies, working on improving himself as an athlete.

Barnes was selected in the 11th round of the 2009 amateur draft out of the University of Notre Dame. As a member of the Fighting Irish, Barnes had his first connection to the Phillies organization even before he was drafted. While there, he wore the same jersey number, 20, that Philadelphia reliever Brad Lidge once sported while on the Notre Dame baseball team.

Barnes, who turns 24-years-old this week, has been an all-star in each of his two professional seasons. In 2009 he batted .287 with 4 homers and 27 RBI in 55 games to become an all-star for the short-season Williamsport Crosscutters of the New York-Penn League, then in 2010, he posted a .292 average with 4 homeruns and 51 RBI in 109 games and represented the BlueClaws in the South Atlantic League All-star Game.

Despite that solid success, however, the right-handed hitting Barnes had an opportunity to improve during the winter months and he took advantage of it. Barnes received a proposal to reside in Philadelphia throughout the off-season and work out at the Power Train Sports Institute from a contact within the Phillies organization.

"I know a guy named Rob Potts, who throws batting practice for the Phillies, that asked if I wanted to come work out at Power Train and hit in the cages, so I took him up on the offer," Barnes said. "It was great and I plan on doing it again next off-season."

Power Train is known for hosting, and providing elite training to, professional athletes in varying sports at the company's locations all over the region.

"I had a really productive off-season. I ended up working out with (Phillies left fielder) Raul Ibanez four or five days a week. It was a good situation with me, had a lot of fun and learned a lot," Barnes said.

Both Barnes and Ibanez, who met at the company's Cherry Hill, NJ training center, worked closely with the staff, who provided a conditioning and strengthening routine designed to develop endurance and enhance performance.

"It wasn't necessarily Raul's (routine) or mine that we did, but we had trainers and we'd go and meet there and do their routines and go hit on our own. My trainer, Ryan Stack, was unbelievable. I worked closely with him and I think I gained a lot of strength and he got me where I need to be," Barnes added.

The hard work paid off quickly for the 5-foot-10-inch, 195 pound Barnes, who has been manning 3rd base on the field and had a strong spring. Lakewood manager Chris Truby took notice and has penciled Barnes, who batted toward the bottom of the BlueClaws' batting order last season, into the third spot in the lineup for the two-time defending South Atlantic League champions.

"I feel good with where my swing is, I'm a year older and hopefully better prepared. As far as hitting in the 3 hole, I'm still trying to accomplish the same things...still trying to hit the ball hard. When guys are on, the goal is to drive them in, whether I'm in the 3 hole or in the 9 hole."

Barnes was fortunate enough to test his extensive off-season work during spring training by facing a few Major League pitchers. AJ Burnett of the Yankees, the Phillies' own Roy Oswalt and Brett Cecil from the Blue Jays were the established hurlers that Barnes batted against in Florida this spring. Barnes saw success against the big shots, slamming a homer off of Burnett and lacing a double against Cecil.