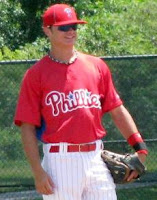 Stephen Malcolm, the Phillies' 8th round draft pick in last year's MLB amateur draft, has been sent home from extended spring training by the Phillies.

The situation is described as a suspension based on a violation of team rules related to alcohol consumption, according to a source. Malcolm, who turned 21-years-old earlier this month, remains under contract with Philadelphia and hasn't been in Clearwater, at the organization's training facility, since the punishment was handed down roughly two weeks ago.

The 6-feet tall, 170-pound shortstop signed with the Phillies for a reported $125,000 last summer after being selected out of San Joaquin Delta Community College in California.

Malcolm made his professional debut last season with the Gulf Coast League Phillies. In 27 games, Malcolm posted a .253 batting average with 3 doubles, 10 RBI and 7 steals.

Jay Floyd said…
If you've got details to the contrary, feel free to reach out to this site...

These details may not have been made public by the organization, but I trust my source.
May 5, 2011 at 3:41 PM