Hewitt Says This is His Year 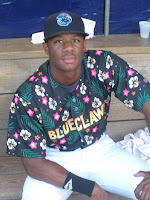 Former Phillies top draft pick Anthony Hewitt is back in Lakewood with the Class A BlueClaws for a second go around. Hewitt was a member of the 'Claws squad last year that brought home a second consecutive South Atlantic League championship but slumped throughout much of the campaign.

Hewitt, a 6-feet-1-inch 190-pounder, was the Phillies' 1st round draft pick (24th overall) in 2008 out of Salisbury High School. In three seasons in the Philadelphia developmental ranks, Hewitt has struggled. In 210 minor league games at three levels, Hewitt has posted a .208 batting average with 19 homeruns and 88 RBI.

Drafted as an infielder, Hewitt moved to the outfield last season and is slated to split time in the outfield and as a designated hitter for the BlueClaws this season.

The Brooklyn, NY native got his 2011 season in Lakewood off on the right foot, as he broke up a scoreless exhibition game on Tuesday night by slugging a 90 MPH fastball from Monmouth University freshman Stephen Frye over the left field wall for a 2-run homer that gave the BlueClaws a lead that the wouldn't relinquish as they defeated Monmouth 3-0, at FirstEnergy Park.

After the final tune up to the preseason, Hewitt spoke about his approach on the night when teeth chattering could be heard over applause, as the temperature dipped into the low 40's and the attendance at the park seemed to match that.

"I'm just going up there and trying to enjoy myself this year," Hewitt stated. "I'm pretty relaxed thus far, just seeing the ball well out of the (pitcher's) hand and just trying to let it all happen."

The righty-hitting Hewitt added that the frigid temperature which kept fans, and nearly all other offense, at bay isn't something that effects him.

"(Shoot), that's part of the game. When I'm in the batters box, I don't feel any cold weather," Hewitt said, as he looks forward to heating things up offensively, on a regular basis.

Within Hewitt lies focus. After a posting a weak .202 average and battling to stay in the everyday lineup down the stretch last season, Hewitt spent a month at instructional ball from September to October, then reported more than six weeks early to minor league spring training camp this January. Being in Clearwater early paid off in Hewitt's mind, as he was able to work closely with the likes of Phillies all-star slugger Ryan Howard during batting practice and had the opportunity to pick the former National League Most Valuable Player's brain a bit.

Hewitt stated, "Just being there early should definitely help me. Spending time with Ryan Howard and just seeing how he goes about his business that early, on a daily basis, can only trickle down to us little guys in the minor leagues."

Hewitt, who will turn 22 years old later this month, said the biggest lesson he learned from Howard was to look within and develop his own game between the ears.

"We got to see how much work it takes to get (to the big leagues) and stay there. It's all a mental game, pretty much, and you can do all that work, but if you're not ready mentally, it won't happen. He told us, 'Learn about yourself' to help us develop," Hewitt added.

As the season rolls on, it will still be up to Hewitt to show and prove that he has made the adjustments necessary for him to move upward within the Phillies organization. Until then, he may continue acting like a chip off "The Big Piece" and leading the charge toward a third straight SAL title for Lakewood.

"I'm just going to go out there every day and have as much fun as I possibly can. I'm confident this'll be my year."