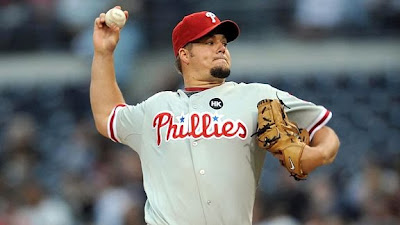 As the core of Philadelphia's highly regarded pitching staff has shined in their most recent outings, it will be up to the team's often forgotten fifth starter Joe Blanton to keep things rolling as the Phillies (10-4) host the Brewers (7-8) for a 3-game series.

Blanton's struggles have been clear in the early going this season. His 10.45 ERA over two starts sits a great distance away from the combined 2.96 ERA of the other four starting pitchers (Roy Halladay, Cliff Lee, Roy Oswalt and Cole Hamels), over their 12 starts.

In the series opener, Milwaukee will counter with their top hurler, righty Shaun Marcum, who was acquired last off-season in a trade with Toronto. Marcum recorded a victory over the Phillies last year, while with the Blue Jays, as he allowed just 1 earned run and struck out 6 batters in 6 innings of work.

The Phillies won five of the six meetings between these two teams last season.

Read ahead for more details on the pitching match ups and plenty more statistical information on this series.


Rickie Weeks leads the Brewers in homeruns, with 4. Weeks is 1-for-12 (.083 avg) in his career against Blanton and Halladay. He has not faced Lee.

Milwaukee closer John Axford has an 8.44 ERA thus far in 6 appearances this season. He has an .067 batting average against in 4 career appearances against the Phillies.

Placido Polanco is a combined 10-for-22 (.454 avg) in his career against the Brewers' three scheduled starters for this series.

In 7 career games against the Brewers, Phillies reliever Jose Contreras has a 0.00 ERA.