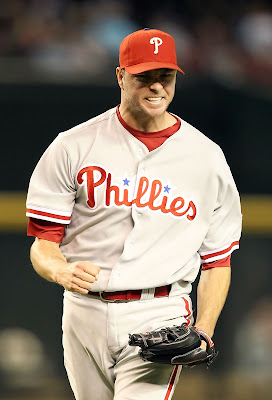 Having lost their second closer to an injury, the Phillies will look to continue rolling through National League opponents as they continue their road trip and head to Arizona for a three-game series.

On Sunday, the Phillies placed righty hurler Jose Contreras on the disabled list with a strained elbow in his throwing arm. Contreras was 5-for-5 in save opportunities this season in a substitute role for primary closer Brad Lidge, who has not pitched this season due to a strained shoulder.

The Phillies have called up Mike Stutes, the Phillies' 11th round draft pick in 2008, to fill the void on the roster.

Ryan Madson, who saved two games for the Phillies in San Diego in the Phillies' last series, will take over the closer duties in Contreras' place.

The Phillies (15-6), who sport the best record in Major League Baseball, will take on the Diamondbacks (8-12), who are in fourth place, 5 1/2 games behind first place Colorado in the NL West division. The D-Backs won 2 of 3 meetings with the Phillies in Arizona last season.

Read ahead for analysis on the pitching match ups and loads more statistics and details for this series.

Ryan Howard's 19 RBI lead the Phillies and are good enough for second best in the National League.

Kelly Johnson is batting .147 in 8 home games this season. Johnson's 11 HR against the Phillies are his most against any opponent.

Gerardo Parra is a .171 hitter in 11 career games against Philadelphia. Parra is a .290 career hitter at Chase Field.

In his career, JJ Putz has thrown 5 scoreless innings against the Phillies. This season, Putz has 5 saves and has held opponents to a .154 batting average.