In a tweet, Cosart declared that the Threshers' pitching staff was loaded. Cosart stated that the core of the pitching staff, which helped lock down a South Atlantic League title for the Class A Lakewood BlueClaws last season, Brody Colvin, Jonathan Pettibone, Trevor May as well as himself, were "The Fab Four". An image of the statement is featured below. 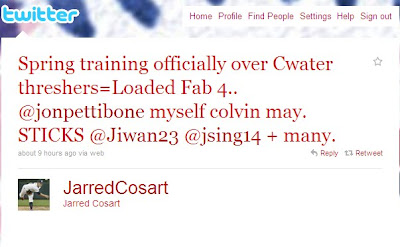 Interestingly enough, just as so many experts and fans stated their affinity toward the Phillies' pitching staff and left out the fifth man, Joe Blanton, Cosart also neglected to include Clearwater's proposed fifth starter, Julio Rodriguez. A Puerto Rico native, Rodriguez split time with Lakewood and short-season Williamsport last season, but became a key addition to the 'Claws to fill in for injuries twice. The first time in May when Pettibone spent a brief stretch on the disabled list, then again after Cosart ran into elbow trouble and missed the second half of the season.

I inquired about the omission, in an attempt to include Rodriguez, as well as make the comparisons between the Phillies' staff and the Baby Phils' group a bit tighter. An image of my inquiry to Cosart is featured below. 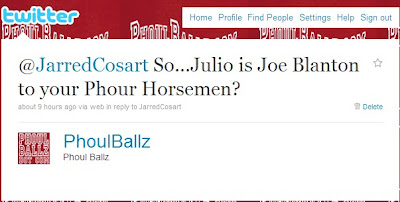 Cosart replied and affirmed that Julio Rodriguez is Clearwater's Joe Blanton and that just like Blanton, Rodriguez will produce for the team, as he always does. Again, an image of the reply can be seen below.

Each of the five pitchers that are slated to start games for Clearwater as the season opens this week, were ranked among PhoulBallz.com's and PhilliesNation's top 25 Phillies prospects in the 2011 ProspectNation countdown. Readers can click each pitcher's name above to view their individual profiles.

So, fans...as good as the Phillies' starting pitchers are these days, just know that the Baby Phils are progressing well and coming up as a full group of understudies for the big club and they don't intend to slow down.