With another Major League Baseball season ready to get underway, I inquired with several baseball aficionados this week, to investigate how the 2011 season will pan out in many aspects. The individuals I spoke with were all baseball experts in their own right...Tyrone Johnson, who hosts 97.3 ESPN's Weekend Sports Guide, Michelle O'Malley of the blog known as Chicks Dig The Long Ball, Bill Baer of CrashburnAlley.com, local sports reporter Kevin McGuire, Dick AKA "The Man With the Golden Arm" of 1BlueJaysWay.com, Peter AKA "Whole Camels" from TheGoodPhight, Pat Gallen of 97.3 ESPN and PhilliesNation, Mike Frohwirth from Philliedelphia.com and author of the new baseball themed mystery novel Game 7: Dead Ball Allen Schatz. I provided my own answers to the inquiries as well.

In the graphic below, you will see each contributor's predictions for Phillies wins, how many games Chase Utley will play this season, playoff teams, World Series results as well as award winners in each league. Click the image to enlarge it. 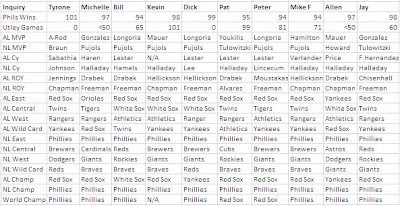 To sum these matters up, the subjects who took part in the survey simply don't think Chase Utley will play anything close to a full season, due to his knee injury. The survey grid obviously shows the majority of the panel likes Boston and Philadelphia as the favorites to advance to the World Series. Also, the win predictions for the Phillies from the experts average out to 96.7 wins. As far as rookies go, former Phillies prospect Kyle Drabek and Braves first baseman Freddie Freeman are well liked. And Albert Pujols stands out as the prime pick to lock down another National League MVP award.

Friend of PhoulBallz Joe Giglio, co-host of 97.3 ESPN's Just a Bit Outside and last season's premiere MLB predictor here on this site, chimed in late, but he likes the Tigers and the Reds in the World Series with Cincinnati coming out on top. Also late, Kevin McGuire added his missing AL Cy Young Award pick as CC Sabathia and believes the Phillies will win the World Series.

In addition to those subjects, I also asked the panel the following questions:

1-Does any NL East rival stand a chance to break up the Phillies' string of division titles? Who/Why?

Tyrone: Nobody has a legit chance to keep the Phillies from winning the division title, but I think the Marlins and not the Braves will finish 2nd, because I trust their pitching staff the most & I think the Braves will have an adjustment to a new manager.

Michelle: The Braves, but only because the Nationals and Mets aren't going to do it, but they have more raw talent than the Marlins. The Marlins may make a strong run for it, though.

Bill: Braves, their pitching is underrated and their offense will probably be superior.

Mike F: The Braves are the 2nd best team in the East. If they stay healthy, and the Phillies have severe injury problems, the Braves could finish ahead of them. Both teams will fatten up their records against the Mets and Nats, and both will make the playoffs.

Jay: Despite the Phillies' injury problems, the division will unfold similarly to the way it did last year, with the second place Braves finishing 5 or 6 games behind the Phillies at the end of the year.

Joe G: Atlanta. They won 91 games in 2010, yet might be even better this year. Sign me up for Heyward with a year under his belt, Freddie Freeman over the corpses of Troy Glaus and Derek Lee, Dan Uggla's guaranteed 30 bombs, and a hard throwing pen. Bobby Cox can't be replaced, but Fredi Gonzalez can follow in his footsteps.

2-Will Jayson Werth help to upgrade the Nats? What type of season will Werth have?

Michelle: I don't think he's going to make a lick of difference for the Nationals. Maybe paired with Adam Dunn and Nyger Morgan he would have made a pretty hefty contribution, but the future of the team still rides on Zimmerman and Desmond's shoulders, plus the return of Strasburg and the uncertainty of the rest of the pitching staff. Werth will probably have a "meh" season. He's not playing for a contract anymore and I could picture him becoming complacent in his new atmosphere.

Bill: Yes, Werth should be a five-win player and could find himself in the NL MVP talks.

Kevin: I think Jayson Werth will have a decent season and he may even be an all-star but his total offensive production may slip with less talent around him. I still think he helps the Nats upgrade, without a doubt.

Dick: Nats are still gonna suck for a long, long time. Werth probably won`t hit as many home runs in Nationals Park, but should lead the league in doubles again.

Mike F: He'll certainly help the Nats. Batting second will deflate his RBI total; he'll finish with 34 HR, to go along with a .283 BA and 86 RBI. He'll post good RISP stats this year, and will be declared "clutch" again.

Joe G: He's a good player, so it can't hurt for 2011. Unfortunately, the dividends of him the in lineup won't be felt until they add more around him and Ryan Zimmerman. Werth's numbers will be Werth: .283-24-94.

3-What sort of impact will Domonic Brown have on the Phillies' 2011 season?

Michelle: I'm not looking for big things from Dom this year. If he gets a fair amount of AB's and just works on the fundamentals, I'll look for the big numbers next year. This is a transitional year for him, especially coming back from an injury so early in the year.

Kevin: I really would love to say he will have a positive impact but until I see any evidence that he can hit at the major league level I remain more skeptical than others. It's not fair to condemn him though as his major league experience is still limited and he has been injured, so hopefully he heals up and finds his swing again so he can provide a spark and some youthful energy at some point in 2011.

Dick: Minimal. The hamate bone takes a while to heal, just ask Lyle Overbay. He broke it in 2007 and the power finally returned last season.

Peter: Brown will spend the majority of the season at Triple-A Lehigh Valley.

Allen: His impact will be on the disable list. Brown's got talent, but the injury is simply a set back.

Mike F: He'll play regularly during both Ibanez and Victorino's DL stints, but spend most of the year as the 4th OF (after replacing Mayberry, Jr. in the role in May).

Jay: Brown will be a nice mid-season addition to the Phillies' roster. In the postseason, Brown will steal a key base or slap a clutch hit that brings him instant hero status and validates the hype that has surrounded him as a prospect in recent years.

Joe G: He'll have bigger impact than some are giving him credit for. He'll be an impact hitter by late summer.

4-And lastly, I asked for some bold predictions, relating to any team/player...

Tyrone: I think that David Wright will be traded by the Mets this season in addition to Jose Reyes.

Kevin: Cole Hamels leads the Phillies in wins in 2011. SAID!

Dick: Brett Lawrie gets a call up whenever someone gives the Blue Jays a decent offer for Juan Rivera and I think he tears the cover off the ball. Just an animal and plays every out like it`s his last.

Mike F: Adrian Gonzalez will hit 56 HR this year...two fewer than Alex Rodriguez' 58. The Phillies will have the NL's only 20 game winner: Roy Oswalt.

Jay: Carlos Ruiz makes the NL all-star team, JC Ramirez joins the Phillies as a September call up and Anthony Gose joins the Blue Jays in that same manner as Toronto falls just short of the AL wild card.

Joe G: Gio Gonzalez will be the break out pitching star of the American League. Trevor Cahill was the Athletics star of 2010, Brett Anderson is the best bet to be it for the next five years, but 2011 will belong to Gio. In fact, I could see him starting the All-Star game in Arizona. Also, Bryce Harper will hit his way to the show by September, arbitration clocks be damned.